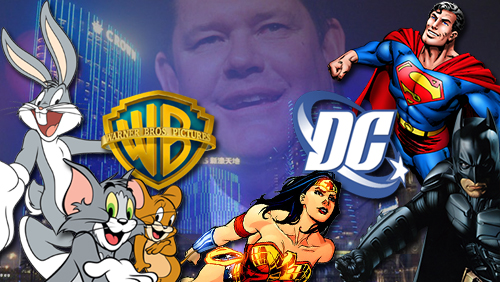 In addition to the 130m tall Ferris wheel, the Golden Eye, an ongoing production of The House of Magic, a 5000-seat entertainment centre, a TV-broadcast studio and a version of the Ibiza dance music institution Pacha Nightclub, the massive complex will also include a 30,000 square foot family entertainment center that will feature Warner Bros and DC Comics characters like Tom and Jerry, Batman, Superman and Wonder Woman.

The $US3.2 billion (AU$3.9 billion) Hollywood-inspired gambling and entertainment complex is set to open in the third quarter of this year and begin operating 400 gaming tables and 1600 hotel rooms.

Gambling revenue in Macau fell 2.6% to 351.5 billion patacas ($54.4 billion) in 2014, the first fall in 11 years since the city began releasing financial reports in 2002. Studio City’s mass-market-friendly features are intended to reduce reliance on high rollers amid a Chinese government crackdown on corruption that has hit VIP gambling revenues.

“It [Studio City] will represent Asia’s ‘next generation’ of immersive, world-leading, entertainment-driven gaming and leisure destination experiences, as we work to support Macau’s tourism development and diversification,” Ho added.

Studio City will be promoted by the short film The Audition—a joint venture between James Packer and Director Brett Ratner’s RatPac Entertainment—starring Leonardo Dicaprio, Robert De Niro and Brad Pitt and directed by Martin Scoresese, a promo for which is viewable below.