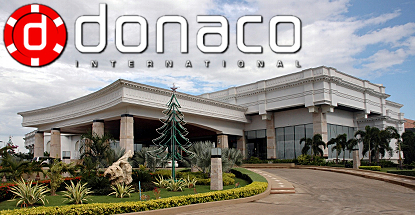 Australian-listed casino operator Donaco International has officially agreed to acquire the Star Vegas Resorts & Club (pictured) in Poipet, Cambodia. Donaco, which operates the Aristo International Hotel and casino in Lao Cai, Vietnam, teased the markets in November with an announcement that it was eyeing a Cambodian acquisition. Donaco says the acquisition should be complete by April.

Donaco will pay US $360m for the Star Vegas property, consisting of $40m in cash-on-hand, $120m in equity issued to the vendor, a $100m new bank debt facility and $100m in equity financing. Donaco offered scant detail on the identity of the vendor, saying only that “key casino management staff are ex-Genting.” Donaco itself is headed up by two nephews of K.T. Lim, the CEO of the Malaysian-based Genting Bhd conglomerate.

The vendor will continue to manage the property for the next two years and has agreed to provide a warranty that Star Vegas will generate at least $60m in EBITDA in each of the next two years following completion of the acquisition. The vendor has agreed to make up any shortfalls in this guarantee in cash. The vendor won’t be paid the usual management services fee but, assuming the property meets its $60m EBITDA target, the vendor will receive a 25% chunk of net profit after tax. The vendor has also agreed to sign a non-compete clause with Star Vegas.

Star Vegas was launched in 1999 and features four hotels with 385 rooms in total. The casino boasts 109 gaming tables and 1,284 electronic gaming machines (EGM), of which 288 are owned outright by the property and 976 are subject to profit-sharing deals. The casino hosts an average of 5k visitors per day and has a database of 3,500 “premium-rated” players. It also features a licensed sports bar, online gaming and lotto licenses plus multiple restaurants and retail facilities.

Star Vegas is one of nine casinos in Poipet that offer a combined 768 gaming tables and 3,874 EGM. Poipet is located on Cambodia’s border with Thailand and thus represents a wholly different market from the Lao Cai casino, which primarily draws customers from China. Thai gamblers don’t require visas to enter the Poipet special economic zone and the casinos use Thai baht as the default currency.

Donaco generates annual earnings of around AUD $16m (US $12.5m) from its newly expanded Lao Cai property and Donaco believes Star Vegas will boost annual revenues by 480% and earnings around 300%. Donaco CEO Joey Lim called the acquisition “a compelling opportunity for Donaco shareholders” given Star Vegas’ status as “a well-established and highly successful business with an enviable market position and excellent growth prospects.”

Donaco also provided a trading update on its Aristo property, saying revenue had risen 50% to $11.7m in the December quarter. Aristo expects to turn a small profit but corporate activity will result in a small loss at the group level. Aristo inked three new junket operators from Malaysia in December and two more junkets from Macau and Shanghai commenced operations in January. Aristo now has 33 approved junkets and management hopes to “more than double” that number in 2015.