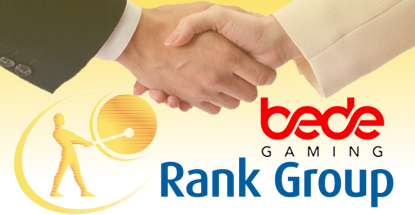 UK-listed gaming operator Rank Group posted decent profit gains in its fiscal H1 despite only a modest growth in revenue. The company reported revenue of £361.7m in the six months ending Dec. 31, up less than 3% over the same period the previous year. But earnings rose 14.5% to £62.1m and operating profit rose by a quarter to £40.8m.

Rank’s Grosvenor Casinos drove the gains, with revenue rising 6% to £205.6m. The Mecca bingo brand was flat at £143.3m while the Spanish-facing Enracha bingo brand dipped by a fifth to £12.8m. Overall operating profit would have been much higher were it not for £14m in costs stemming largely from Rank’s efforts to beef up its online infrastructure.

Rank’s online operations reported revenue up 16% and operating profit up 75% year-on-year. Grosvenor’s online operations saw revenue surge over 70% to £9.9m, while turning in an operating profit of £1.9m versus a £900k loss in the comparable period a year ago. Mecca’s digital revenue rose a more modest 5.7% to £31.5m but profit rose nearly 24% to £8.4m. Nearly two-thirds of Mecca customers play via mobile devices, generating 37% of Mecca revenue.

Rank also announced it was shifting its core online platform to one provided by Bede Gaming, who beat out incumbent OpenBet for the contract. However, OpenBet will remain a key content provider for Rank and will continue to provide its remote gaming server for specific game integrations.

The Rank deal marks the first ‘tier one’ operator deal for the Newcastle-based Bede, which currently serves over 20 casino and bingo sites and won Bingo Supplier of the Year at the most recent eGaming Review Awards. The deal allows Rank the option of taking an equity stake in Bede via a convertible loan.

Rank says it plans to sequentially migrate all three of its brands to the Bede platform, with the first brand to accomplish the move this year. The new platform will allow the introduction of new games content from IGT, Playtech, Bally, WMS, Novomatic and other firms. Rank’s H2 plans include the formation of a shared digital marketing team and a single digital agency for all three brands. Former William Hill and Ladbrokes veteran Colin Cole-Johnson was recently appointed to tne newly created role of Group Director of Digital and Cross Channel Services.