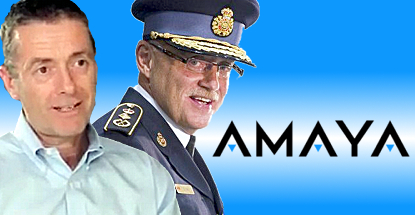 Canada’s Amaya Gaming has made a couple executive appointments, including the successful poaching of the former head of the Ontario Lottery and Gaming Corp’s (OLG) online gambling division just weeks after OLG’s long-delayed online gambling site PlayOLG.ca had its official launch.

On Wednesday, Amaya announced it had appointed George Sweny (pictured on the left) as its new VP of strategic ventures. Sweny’s resume includes stints with OLG’s predecessor, the Ontario Lottery Corporation, as well as the Interprovincial Lotteries Corporation, the Alcohol and Gaming Commission of Ontario and the bingo unit of the British Columbia Lottery Corporation (BCLC). Most recently, Sweny served as senior VP of OLG’s charitable and iGaming divisions.

Amaya also appointed Chris Lewis (pictured, in uniform), former Commissioner of the Ontario Provincial Police, as an advisor to Amaya’s board of directors. Amaya CEO David Baazov said Lewis’ experience would enable the company to “continue to lead the way in security processes and procedures as well as integrity.” Baazov said Sweny’s “extensive gaming experience in both the public and private sector” would help Amaya maintain “the highest standards in responsible gaming.”

Meanwhile, BCLC has appointed Dr. Kahlil Philander as its new Director of Social Responsibility. Philander is the former director of research at the University of Las Vegas, Nevada (UNLV) International Gaming Institute. Philander also serves as Senior Policy Researcher at the Responsible Gambling Council of Canada (where Amaya’s new hire Sweny has a seat on the board).

Moving east, Loto-Quebec has revamped its responsible gaming initiative, based around the theme of “a game should remain a game.” The campaign, which will run between January 18 and March 15, strives to educate players of the role of chance in various types of gaming and to dispel commonly held myths. The campaign stresses that there are “no tricks or strategies that can improve your chances of winning” at various types of gambling but “there are strategies and tools to limit the risk of losing control.”