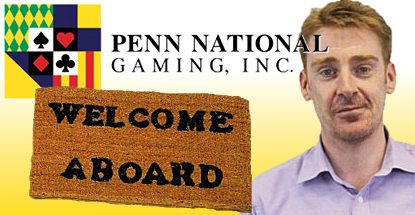 Regional casino operator Penn National Gaming has decided to get into the online gambling business. The company, which operates 26 facilities in 16 US states and one Canadian province, has appointed Chris Sheffield (pictured) to the newly created position of Senior Vice President Managing Director I-Gaming.

Sheffield, a former managing director of digital at UK bookies Betfred, will help Penn prepare for “the launch of online gaming initiatives across its portfolio.” Sheffield joined Betfred in March 2011 following a seven-year stint as CEO of Million-2-1 Limited, a mobile gaming outfit Sheffield founded and which was acquired by gaming device maker International Game Technology in June 2008.

Sheffield will report directly to Penn CEO Timothy Wilmott, who praised Sheffield’s “technical background, extensive executive and operational management experience and broad knowledge of the online and mobile gaming world.” Wilmott put no timeline on when Penn’s online efforts might appear, saying only that the company would make its move into the digital realm “over the coming years.”

Of the 16 US states in which Penn operates, only two – Nevada and New Jersey – currently allow some form of regulated online gambling. Of the other states in which Penn has a presence, Pennsylvania and Illinois have done the most flirting with the notion of instituting some kind of regulated online gambling regime, but neither state has yet to move a bill past the informational hearing stage.

Penn is set to release its annual revenue report card on Jan. 29. In its Q3 results, the company reported revenue of $645.9m and adjusted earnings of $65.7m for the three months ending Sept. 30.

Ganapati appears to be falling apart
Derek Tonin
21 hours Ago