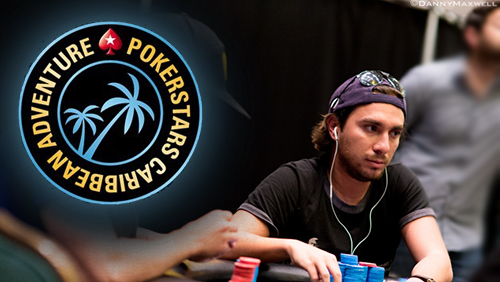 Poker is all about taking those chances when they come. Ilkin Garibli has just done that in spectacular fashion by winning the $25,000 High Roller event at the PokerStars Caribbean Adventure (PCA). It was his first-ever live tournament score.

Garibli, a cash game player by trade, was on holiday when the PCA came to town. A few friends convinced him to throw his hat in the ring. He’ll be upgrading it now. The 26-year old from Azerbaijan topped the largest ever PCA $25k event, and the seventh largest $25k in poker’s history. 269 entrants (69 of them re-entries), once again showing the poker planners that the re-entry format is a popular concept.

The final day started with 11 souls: Dominik Nitsche, Bryn Kenney and Lee Markholt a sample of the talent to hit the rail before the final table was created. What a final table it was.

The Ukrainian Oleksii Khoroshenin – a former European Poker Tour (EPT) Main Event champion – moved to fifth place in the Ukraine all-time money list after his third place finish, but it was the Americans that made most of the money.

The former PCA Super High Roller champion Scott Seiver had an impressive festival: making final table appearances in both high rollers for a combined score of $600k+; not a bad start to 2015 as he tries to make it three consecutive years with $4m+ annual hauls.

Seiver wasn’t the only one enjoying himself in the Bahamian heat. Nicholas Petrangelo added a sixth place finish to his $5k side-event victory, just a few days ago, and walks away from the PCA with over $400,000 in earnings.

Then there was the former World Poker Tour (WPT) Player of the Year, Faraz Jaka. The Toilet maintaining the momentum that saw him win the WPT High Roller title in the pre-Christmas jaunt to South Africa. Jaka took home $221,440 for his seventh place finish in this one, his highest haul since finishing runner-up to Talal Shakerchi in the 2013 EPT London High Roller.

Then you had the multiple World Series of Poker (WSOP) bracelet winner, Dan Heimiller. The reigning Seniors Champion exited first in this one, but will still be happy with a $162,700 pay day – or maybe not?

After Khoroshenin exited in third, Garibli and the American Joe Kuether cut a deal that would see them both secure million dollar scores and $100k to play for. They both wanted it as well. It took two and a half hours for Garibli to dispatch the man, with WPT and WSOP final table experience, to the stands.  Kuether’s earnings move over the $3m mark as he once again shows the poker public that he is a man to be taken very seriously indeed. Garibli goes back to his cash games.