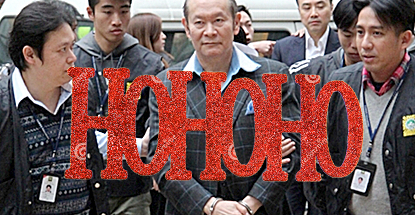 The nephew of Macau casino icon Stanley Ho has been arrested as part of what authorities are calling the largest illegal prostitution ring ever busted in the world’s top gambling hub. (Insert your own ‘ho’ jokes here.) On Saturday, Alan Ho (pictured center), an executive director at the Hotel Lisboa, was arrested along with five other hotel staff for running a ring whose illicit activities reportedly earned MOP 400m (US $50m) since setting up shop in 2013.

The 68-year-old Ho, the former president of the Macau Travel Association, is believed to be one of two ringleaders of the operation. Ho was at one time a member of the management committee of SJM Holdings, Macau’s largest casino operator, which counts the Lisboa among its properties. Ho’s current role with SJM is unknown and SJM has yet to comment on the arrest.

Macau Judiciary Police said the ring controlled up to 100 rooms in the hotel in which women from mainland China and Vietnam plied their oldest profession. One of the five arrested staffers was a mainland woman who acted as the hotel lobby’s senior manager to coordinate the activity while the other four were responsible for security and recruiting girls online.

Police arrested 96 suspected prostitutes in Saturday’s action and found a list of 2,400 women believed to have utilized the hotel’s services for similar purposes. The ring allowed independent operators to set up shop in the hotel, for which they paid the ringleaders MOP 150k ($18,800) up front and MOP 10k ($1,250) per month for ‘protection’ fees. The girls were allowed to keep all the money they earned via their clients, which typically range from MOP 1,500 to MOP 5k per session.

Prostitution is legal in Macau but soliciting and living off the avails of prostitution are against the law. The ring reportedly allowed its working girls to frequent the hotel’s ground-floor area provided they didn’t constantly stand in the same place. If they got tired, they were told to rest in the hotel’s restaurants or take a walk outside.

In 2012, Las Vegas Sands was accused of harboring prostitutes at its Macau properties. Sands vehemently denied the allegation, which was made by former Sands China CEO Steve Jacobs as part of his wrongful termination suit. However, in December 2010, Macau police arrested over 100 women on prostitution charges at Sands’ Venetian Macao property.