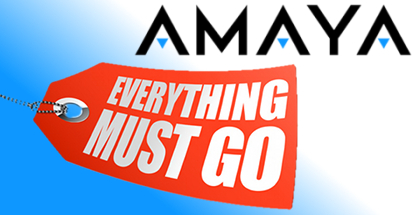 Canada’s Amaya Gaming has put its entire B2B asset portfolio under review, with the company potentially shifting to a completely B2C model. Amaya revealed the potential shift at the tail end of an announcement of a plan to repurchase and cancel up to 5% of the public float its common shares. Amaya intends to fund this buying spree “through proceeds of certain divestments and cash on hand.”

The company believes its share price – which has yet to recover from the plunge it took following the mid-December news of an investigation into potential insider trading activity – is currently undervalued. Amaya’s shares rose nearly 12% on Monday to $30.40, still well below its $38.74 peak in late November. Amaya’s shares underwent a rocket ride last year following its $4.9b acquisition of the Rational Group, the parent company of PokerStars and Full Tilt.

As for those aforementioned divestments, Amaya announced in October that it was looking to sell its Cadillac Jack (CJ) division, which supplies gaming devices to land-based casinos. Despite being a significant contributor to Amaya’s pre-Stars bottom line, the level of consolidation in the gaming device industry left CJ a minnow in a world of whales. On Monday, Amaya said it “has received and is evaluating non-binding proposals from certain persons.”

Amaya now says it “intends to explore various strategic opportunities to divest its other B2B assets.” These include the US-focused Diamond Game lottery services business and its Amaya Online platform. Should Amaya successfully shed these divisions, the company would essentially be reduced to little more than a rebranded Rational Group (not that there’s anything wrong with that).

Amaya’s online platform is currently operational in New Jersey’s regulated online gambling market via a deal with Caesars Interactive Entertainment. Amaya also supplies content to the online gambling sites of some of Canada’s provincial gambling monopolies. Amaya has been maneuvering to make PokerStars the first internationally licensed online gambling site to be granted a license to operate in Canada, although many hurdles remain before that goal can be achieved.

Amaya says it plans to use the proceeds of any asset sales to fund not only the share repurchase plan but for “the repayment of indebtedness.” Amaya funded its Rational Group acquisition largely through debt raised via private equity firms, who aren’t typically shy about pressing for repayment in a timely manner.