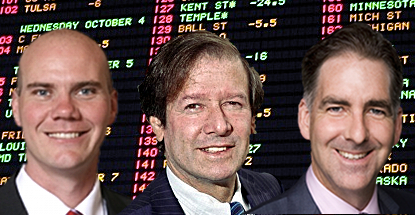 A member of Indiana’s state House of Representatives has introduced a bill to authorize legal sports betting at state casinos (land-based or riverboat), racinos and off-track betting sites. House Bill 1073 has no official name, but it should be called the We Can’t Do Squat Until The Feds Say It’s Okay Act of 2015.

The bill requires the state gaming commission to ensure intrastate sports betting is compatible with federal law, something legislators in New Jersey have had an awful time trying to put past the feds. Fierce opposition will also come from the NCAA, which is based in Indiana, and which has joined the four pro sports leagues in fighting New Jersey’s quest for legal betting.

The bill’s author, state Rep. Alan Morrison (pictured on the left), says the goal is to get the state’s regulatory ducks in a row so that it’s ready to act if/when the federal government finally gets around to amending or abolishing the 1992 PASPA sports betting prohibition. Morrison told the Indianapolis Star that the state had become “increasingly reliant” on gaming revenue, which has been “trending down” of late. As such, Morrison says it’s incumbent upon legislators “to figure out how to fix it or to improve on what we have.”

Morrison has also introduced a separate bill (1074) that would authorize daily fantasy sports (DFS) services at state racinos. Not surprisingly, Morrison believes this bill has a far greater chance of making it into law.

MONMOUTH PARK DELAYS FANTASY SPORTS ROLLOUT
Meanwhile, New Jersey’s Monmouth Park racetrack has delayed plans to roll out its own DFS offering. NorthJersey.com quoted track operator Dennis Drazin (pictured center) acknowledging that the system wouldn’t be up and running before the NFL playoffs were over. Drazin said the plan now was to aim to be operational by the time the NCAA March Madness basketball tourney kicks off or for the start of the 2015 baseball season.

Drazin said Monmouth had been wrestling with whether to offer DFS online rather than make customers physically present themselves at the track. The problem is how to attract players to a website when there are already multiple big players in this space (DraftKings, FanDuel, etc.) with which a Monmouth site would have to compete.

CANADA MP PLEADS FOR NHL RETHINK ON C-290
North of the border, a member of Parliament is asking the National Hockey League to rethink its opposition to the C-290 sports betting bill. Brian Masse (pictured right), whose Windsor West constituency includes a Caesars Entertainment-branded casino, has been a long proponent of C-290, which was passed with all-party support in the House of Commons nearly three years ago but has languished in the Senate ever since.

Masse has now made public a letter he sent to National Hockey League commissioner Gary Bettman asking the NHL to reconsider its anti-C-290 stance. In the letter, Masse notes that the NHL has since inked a partnership with DraftKings and is believed to be considering a team in Las Vegas. Masse believes these developments have undercut the league’s traditional opposition to sports betting.

In December, Senator Bob Runciman told Canada’s TSN that C-290 could come up for a third and final reading and a deciding vote as early as January. Of course, this is hardly the first time a senator has vowed to give C-290 its date with destiny and even if a vote is called, support for the measure in the Senate has been pretty soft. Anyway, the Senate doesn’t reconvene until Tuesday, Jan. 27 and C-290 currently isn’t on the order paper, so check back here in February and we’ll see what’s what.