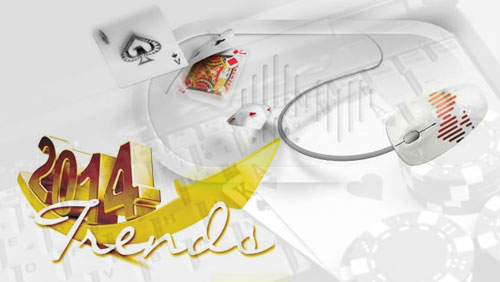 Lee Davy takes a look back through 12-months of cyberness to capture five online poker industry trends of 2014.

Where would we be without it?

Actually, just ask millions of frustrated Americans and they’ll let you know. For the rest of us that live in countries placing the risk of selling someone a handgun above the dangers of grinding online it’s an every day part of our lives. It’s fun. It’s a hobby. It’s a job. It’s just a bloody game of cards, and we love it.

Here are five noticeable online poker industry trends that have passed by my slanty eyes in 2014.

1# The Demise of the Sponsored Pro

Personally, I don’t understand what took them so long, but whatever their reasons, 2014 was the year that it stopped. You were more likely to see Mario Balotelli putting the ball into the back of the net than you were of seeing a contract extension handed to a poker player representing an online poker room.

Marketing budgets were pauperized, pulverized or pummeled into promotions, with the professional poker player feeling the brunt of it. With the exception of the unique situation presented by the World Series of Poker (WSOP) November Nine, and the hiring of Greg Merson to help promote WSOP.com, all online poker rooms cut their cloth this year.

Marvin Rettenmaier and Kara Scott left partypoker; JC Tran and Sam Holden left 888 Poker; Joe Cada, Marcel Luske, Alex Kravchenko and a whole host of Latin American pros left PokerStars; everyone left Full Tilt; and prior to Ultimate Poker going the way of the Dodo they too decided to bring the axe down on more necks than a man wearing a scary looking mask during the French revolution.

It seems the only people who are not deemed as useless as a shit-flavored lollypop are sports stars. 888Poker hired Luis Suarez, and then fired him after he took the meaning of ‘enjoying an Italian’ quite literally; partypoker hired the former NHL star Ken Daneyko; and Stars seemed to plough most of their marketing budget into the promotion of tennis star Rafa Nadal.

I believe these changes will continue into 2015 as online poker rooms start realizing that sports stars are about as useful as poker players when it comes to attracting new players.

When you consider that Billy Bob Thornton used to bang Angelina Jolie on a regular basis (as well as drink her blood apparently), then you realize that shit can get bad just as quickly as it can get good.

In a bid to cut costs, PokerStars made changes to various VIP programs and promotions, increased rake, added juice to currency conversions, forced the fish away from the regs and down the tributaries of lottery games, cut affiliate programs, and started to develop an allergy to the color grey.

The Grinders went berserk and blamed the Amaya takeover, PokerStars admitted that it had nothing to do with the takeover, and the whole thing started to feel like an uncomfortable scene whereby Cheryl Cole is your wife, and she has just admitted that she has screwed your best friend. You hate life. You really do. But you are never going to find anybody that looks as good as Cheryl Cole, so you take it up the poop chute and get on with life.

‘Regulation’ seemed to be the buzzword of 2014 with online poker rooms scared shitless of adopting the ‘bad actor’ tag in any future productions of legalized online poker in the brave new world. Even PokerStars – an online poker room some quarters of America believe are the baddest actors of all – used 2014 to try and distance themselves from future problems.

The color grey became about as appealing as…well, the color grey, after PokerStars and Full Tilt withdrew from a wide range of Asian, African and Middle Eastern countries, and that’s not the end of it, with our very own Mr. Ayre predicting a similar problem likely to crop up in the land of Mounties, maple syrup and elks.

Online poker skins on the Ongame online poker network also exited from similar markets, and regulatory changes in the UK spelled the end of business for Winamax and PokerStars.fr.

Would you rather be lucky or good?

Everyone knows the answer is ‘lucky’ and that includes the marketing departments of online poker rooms. It started very quietly with the introduction of a lottery style Sit n Go (SNG) game called Expresso, on the Winamax platform, and became a little more vivid after PokerStars rolled out their own version called Spin & Go.

The fish loved the games so much that the grinders started complaining that there was nobody left to take money from at the cash game tables, which kind of proved a point that these luckbox style games were exactly what the punter wanted in the first place.

“Shall I log on and lose all of my money and dignity getting my ass handed to me on a plate by ‘StupidNaMe1’, or lose the same amount trying to win an insane amount of money on a game called Spin & Go?”

Mm…let me think about that one for a minute.

It wasn’t just the introduction of Jackpot style SNG games that moved the punters outside the range of the grinders. Online casino games are also being rolled out in most online poker rooms. A decision that led to the martyrdom of the two-time European Poker Tour (EPT) Main Event champion, Victoria Coren-Mitchell; who chose to terminate her contract with PokerStars after they took the business decision to add casino games to their online poker room.

5# The Rise of Cryptocurrency

With the Ultimate Bet scandal, Lock Poker scandal, Full Tilt Poker ponzi scheme scandal, Danish Trojan Horse laptop scandals, and a whole host of other online poker related financial fuck-ups, is it any wonder that the world of online poker is taking a very keen interest in the up and coming world of cryptocurrency?

Breakout Gaming developed their own cryptocurrency called Breakout Coins, and hired a host of old school professional poker players to market their new site, BitnPlay have recently announced their intention to open up for action in early 2015, and Michael ‘The Grinder’ Mizrachi told yours truly of his plans to open a cryptocurrency operated online poker room called GetLuckyPoker.