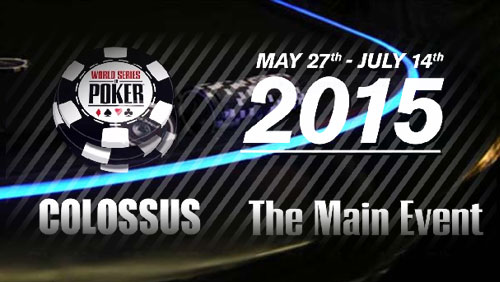 The WSOP have left poker players salivating over the festive period after giving them a sneak peek of a 2015 schedule that includes the lowest buy-in event for 35-years: a $565 buy-in event dubbed The Colossus carrying a guaranteed prize pool of $5m.

With the European Poker Tour (EPT) taking over Prague, and the World Poker Tour (WPT) doing likewise in Las Vegas, you could be forgiven for forgetting about the World Series of Poker (WSOP) as 2014 draws to a close.

The biggest and baddest poker series in the world has ended 2014 by giving us a teaser of the goodness that we can expect to taste in the summer. They have just opened the loop, and it will not close until 14 July 2015.

The WSOP have announced plans to open the 46th annual series by introducing the lowest buy-in event in the past 35-years – a $565 buy-in event dubbed The Colossus. The event will feature two starting flights, will be re-entry, and will carry a $5m guarantee. It’s bold, it’s brash, it’s beautiful, and the field size will be bloody big. With a 5,000 starting stack, and blinds beginning at 25/50 it’s going to be a humdinger of an event.

‘Load up the entire gang – the home game, the spouse, whomever you know that enjoys the game,” said WSOP Executive Director Ty Stewart, “The Colossus is going to feature a historic prize pool at this buy-in level and it can only happen at the World Series of Poker.”

That’s not the only great piece of news that the WSOP have. The Main Event will once again carry a $10m guarantee, and 2015 will see the return of the largest poker tournaments in 2014: The Millionaire Maker and the Monster Stack – tournaments that pulled in fields of 7,977 & 7,863 respectively last year.

“We believe the WSOP is uniquely able to deliver the big event with life-changing money for some and a life-experience for all,” said Stewart, “We are going to proudly stage the kinds of events which draw players from all around the world while also staying true to our heritage of contesting all variants of poker.”

The 46th Annual WSOP will run May 27 to July 14; the Main Event dates are July 5 – July 14, and will feature three starting flights; the $565 Colossus will begin May 29 &30; the Millionaire Maker will return June 5th & 6th; the Monster Stack returns June 12th & 13th; the Seniors Championships returns June 19th; the Ladies Championship returns June 25th; the $111,111 One Drop High Roller will begin June 28th and The Little One for One Drop begins June 30th.

The WSOP also promise its usual barrage of mixed game action with the return of the popular ‘two-track’ system of holding $1,500 and $10,000 Championship events.