Balazs Botond and Louis Salter have taken the top prizes at the Eureka Poker Tour in Prague. Botond picked up €206,948 after winning the Main Event, and Salter took €124,560 after winning a highly competitive High Roller. 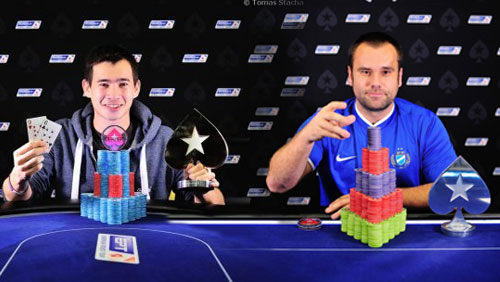 Firstly, the Main Event, and it was the Hungarian Balazs Botond topping a field of 1,738 entrants, to take the first prize of €206,948. Botond’s victory means Hungarian players have now won 50% of this season’s Main Event stops, after Zoltan Gal reigned supreme in Vienna.

Botond started the final day 9/10 in chips, but used all of his live tournament experience to bulldoze his way through to the final three players. Lebanon’s Ayman Zbib, Greece’s Athanasios Xenodochidis, and Botond cutting a three-way deal that saw Botond lock in €186,948, Zbib €163,921, and Xenodochidis €186,881. That left €20,000 for the winner, which is tucked away in the wallet of Botond.

Botond’s victory represents 50% of his entire live tournament earnings spanning five years, and tops his previous best of $208,256 for coming fourth in the EPT Campione Main Event in Season 8. He replaces Andras Nemeth as the tenth most successful live tournament casher in Hungarian poker.

The Salter family are having an absolute riot this year.

Jack Salter has earned $1.7m in live tournament earnings, including runner-up finishes in two of the biggest tournaments of the year (Aussie Millions & WSOP-APAC Main Events), and his younger brother Louis is proving that not all the Salter family DNA ended up inside only one of the boys.

Salter Junior has topped the field in the €2,200 Eureka High Roller after weaving his way through 621 of the best players in Europe. Salter was part of a seven man ICM chop that was negotiated once Michael Aron fell in eighth place.

The victory was his second in the past fortnight – he won a side event at the Master Classics for €46k – and his second six figure win of the year after a runner-up spot at the Asian Pacific Poker Tour (APPT) Asian Championships of Poker (ACOP) in Macau.

Jack Salter is also having a fun time in Prague. He cashed in the Eureka High Roller in 30th place, and won the EPT’s first-ever €500 Full Tilt Flipout after beating Carole Segoura in heads-up action.