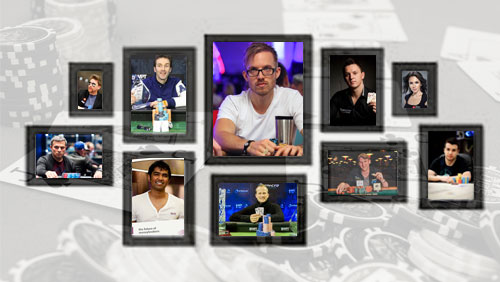 Lee Davy shares his views on the players he believes are prime candidates to make an impact on the game in 2015.

Choosing 10 poker players whom I believe have the right blend of whatever it takes to be stars of 2015, is about as difficult as shaving my ass hair. Unlike my ass hair, I have managed to do it. All that remains is for you to disagree with me.

The recent edition of BLUFF Europe magazine carried the headline: The Best World Champion Ever? The Americans might not have known who he was, but to the Europeans, Martin Jacobson has always been one of the best players in the world, and now he has $10m to invest in his poker career.

I expect the world champion to have a great 2015. He is on a high the like of which Keith Richards has never experienced and that produces confidence – the main ingredients of a heater. You can expect to see Jacobson investing some of that $10m in High Roller tournaments. Don’t be surprised to see him come out of January having had exceptional time at both the Aussie Millions and PokerStars Caribbean Adventure (PCA).

“We always knew he would make it at the very highest level of the game.”

That was a comment made at my table at the recent WPT500 event at Dusk till Dawn (DTD) in Nottingham. The greatest card room in Europe has been the breeding ground of the some of the most successful British poker players in recent times, and Simon Deadman used to suck on that particular nipple.

He is the epitome of the local live grinder done good. Rarely will he even turn his laptop on, let alone play in an online poker tournament. He is unusual in as much as he is old school, preferring to cut his cloth staring into the eyes of the unflinching.

Deadman has always been special because of his ability to consistently finish in the top three money positions, but in 2014 he seemed to step it up a gear with over $1.1m in live tournament earnings. A victory at the Hollywood Poker Open Grand Final in Las Vegas, during the summer, proving he can top a decent field, and his recent fourth place finish in the EPT Prague High Roller showing he has the ability to mix it with the elite.

Laurent Polito is the French version of Simon Deadman; another young man with unerring accuracy when it comes to those top three positions.

Polito is a WPT National Series revelation – having won the Paris event on two occasions, with a Cannes victory sandwiched in between. He has even shown his promise at the very highest level of European poker with victory in the EPT Barcelona High Roller in 2012.

His last three live cashes have all been victories, and I can’t see any reason that form won’t be continued.

Either Pratyush Buddiga has won the lottery, found the faith of a backer with plenty of dosh, or Spelling Bee championships are handing out multi-millions in prize money? Either way, he has found the financial freedom to step up his game and BOOM he is loving every minute of it.

Buddiga has shifted from getting lost in fields in excess of 1,000 players to ending near the top of the much more manageable 30-50. Sure, the excellence of the players has increased, but it seems only to the level that Buddiga’s game expands.

With over $2m in 2014 live tournament earnings, and no reason to suggest that his train has developed a brake block issue, I expect him to continue powering through the next 12-months at the same insane pace.

If Everest Poker renew Sam Trickett’s contract in 2015 then his inclusion on this list will have been justified, if not, then I don’t think he will live up to my lofty expectations.

Nobody has earned more live tournament dollar, in Europe, than Trickett, but that in itself becomes a problem. After setting himself up for life, Trickett needs the motivation to play in live tournaments, and his responsibilities with Everest give him that motivation.

He came mightily close to capturing his first WPT title in 2014, and didn’t get the luck he needed to turn a mediocre year into a very successful one. If he can continue to build stacks, and get the magic dust back, he can do extremely well in 2015.

Jason Somerville is fast turning into one of the most promising young superstars of the modern game. He is one of the very few openly gay poker players in the industry, and his live twitch shows are becoming increasingly popular.

Many people are calling him the next Daniel Negreanu, and few can argue with that statement. All we need now are more results, and in 2014 he showed us a glimpse of his capabilities by finishing fourth in a $100k Super High Roller at The Bellagio for his first seven figure score of his career.

I expect him to be a hot property in 2015, and keep your eyes on a PokerStars tie up should they break into the New Jersey market during the next 12-months.

2014 was a landmark year for the most successful online tournament player in the history of the game. Not only did he rip the monkey off his back with victory at the WPT LA Poker Classic, but he also found time to write one of the best poker books of his generation, and get engaged to the love of his life.

It was the first time since 2012 that he ended the year with over a million dollars in live tournament earnings, and he has started doing some excellent work with mind coach Dr. Stephen Simpson.

The theme of this article is confidence, and Moorman has it in buckets at the moment.

I felt it was important to have a Russian in my Top 10, as I believe their influence on the game is growing stronger each year. I plumped for Troyanovskiy because of his consistency, and willingness to play at all levels of the game.

If you play in buy-in levels that wide, and with that consistency, there is no end to the results that he can rack up.

Liv Boeree is a prime candidate for an explosion of results. 2014 was her best return since her breakout year of 2010, and she currently finds herself in the middle of the perfect poker storm.

She has fallen head over heels in love; she has helped found Raising For Effective Giving (REG), and associates with some of the most fiendish minds in poker’s modern era. It’s simply a question of when, not if, Boeree starts making headlines in the biggest tournaments in the world.

Kevin MacPhee is one of those lucky sorts. The type of player who is equally adept at beating the crap out of you whether you are playing online or live. Form once again comes into the equation as MacPhee closes a chapter on one of the most successful years of his career since his EPT victory back in 2010.

The American reminded the world of his ability with final table appearances in all three of the biggest tournaments in the world, and barring a little bit of luck, could easily have ended the year as a member of the Triple Crown fraternity and only the second player to win two EPT titles. If he can continue to keep his head straight, focus on the game, and build on his impressive results of 2014, he will be one of the stars of the next 12-months.