Daniel Negreanu and Jack McClelland were officially enshrined into the Poker Hall of Fame in a wonderful night of nostalgia, at Binion’s Gambling Hall, on the eve of the World Series of Poker final table. 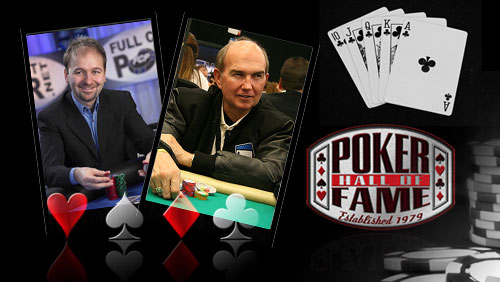 The Poker Hall of Fame Class of 2014 have been officially anointed, after Daniel Negreanu and Jack McClelland received the attention they both deserved, in a ceremony held at Binion’s Gambling Hall on the eve of the World Series of Poker (WSOP) Main Event final table.

Former Tournament Director, McClelland, 63, was inducted after a heart warming speech delivered by Phil Hellmuth Jr. (At least we think it was him, as it was difficult to tell with him not wearing his cap and all), and McClelland paid tribute to two very special women in his life, his late wife Alma, and Elizabeth, his partner for the past 15 years.

Daniel Negreanu, 40, was inducted after a speech delivered by his agent Brian Balsbaugh. It’s been a tough few weeks for Negreanu – probably the toughest in terms of public opinion in his career – so it was nice for him to have this evening.

It was an opportunity for him to leave his bravado at home, for the public to honor his greatness,and contribution, and for humility to shine to the fore. The six-time WSOP bracelet winner, all-time money earner, two-time WSOP Player of the Year, 2014 Tiddlywinks champion, and 2014 Vegan of the year, paying tribute to his late mother during an emotional speech.

The MC, for the evening, was the WSOP’s own Nolan Dalla, and on his personal blog he made mention of the attendance of some of poker great’s, including Jack Binion, who was setting foot in Binion’s Gambling Hall for the first time since 1998; Doyle Brunson, Lyle Berman, Eric Drache, and Linda Johnson were also in attendance.

Wicked Chops Poker even managed to take a snap of a few photos of a man who looked very much like Howard Lederer. Perhaps, the 2+2 poster who created a thread to try and revoke Daniel Negreanu’s Poker Hall of Fame status paid Lederer to throw some rotten tomatoes at the Canadian.

No tommies were thrown, Negreanu walked away unscathed, and if anybody even cares, the 351 people who voted in said poll voted 56.98% in favor of Negreanu picking up his award.

“I love this game, I want to see it grow, I want to see people enjoy it and have fun with it and if I can contribute to that I intend to. I was born to be a poker player.” Negreanu said in a specially arranged Poker Hall of Fame video by his employer PokerStars.