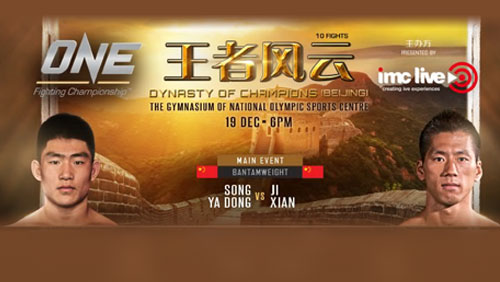 15 December 2014 – Singapore: Asia’s largest mixed martial arts organization with a 90% market share, ONE Fighting Championship™ (ONE FC), has finalized the fight card for ONE FC: DYNASTY OF CHAMPIONS. The event will be held in partnership with leading events organization IMC Live. The event will feature a clash of two top lightweights as Ariel Sexton meets Willy Ni. Michal Pasternak will also put his undefeated record on the line when he takes on Rafael Silva from Portugal. Four of the top flyweights in China will also compete in a four-man, one-night tournament.

CEO of ONE Fighting Championship™, Victor Cui, stated, “ONE FC: DYNASTY OF CHAMPIONS is set to be an epic night of world-class mixed martial arts action! Some of the world’s best mixed martial artists will descend on Beijing along with some of the best in China, to put on a night to remember!”

ONE FC: DYNASTY OF CHAMPIONS will take place at The Gymnasium of National Olympic Sports Centre in Beijing on 19 December. Tickets for ONE FC: DYNASTY OF CHAMPIONS are on sale now at 永乐票务 (WWW.228.COM.CN). Ticket categories begin with the full Red Carpet and cageside experience for VIPs at RMB 1080.Tickets priced at RMB 780, RMB 580, RMB 380, RMB 280 and RMB 180 are also available. Prices include ticketing fee.

Ariel ‘Tarzan’ Sexton is a Gracie Jiu-Jitsu black belt with an impressive record of eight wins and three losses. He was born in Canada but now lives in Costa Rica. After discovering Jiu-Jitsu in 2001, he quit his day job and dedicated his life to mastering the art, before transitioning to mixed martial arts. His grappling acumen was on full display in his eight wins, six of which he finished with a variety of submission moves.

Willy Ni is the protege of striking specialist Melvin Manhoef. He started his career with fifteen wins in sixteen bouts. Ni is a submission specialist as well and he will look to bounce back with a win over Ariel Sexton.

Michal Pasternak is a Polish mixed martial artist with an unblemished professional record of ten wins and no losses. Pasternak embraces the diversity of the sport, and his balanced record of knockouts and submissions reflect that. Pasternak will have his hands full with the world-class talent in the light heavyweight division, populated with stars like Roger Gracie, James McSweeney and Jake Butler.

Rafael Silva is a Portuguese mixed martial arts veteran with more than 50 fights of experience. Silva has notched 21 victories via submission and will look to get a winning streak in ONE FC going with a win over Pasternak.

Liu Xu has a background in Sanda and wrestling and has competitive experience in both sports. He is still undefeated in Sanda and prefers striking over grappling. His favorite striking maneuver makes use of his elbows, which he has utilized to devastating effect in the past.

Wang Wei has been training in martial arts since he was 10, and has Judo, Brazilian Jiu-jitsu and Taekwondo experience. He is the oldest of the competitors in the flyweight tournament but believes he makes up for it with more experience having competed in multiple regional and national championships in Judo. Wang Wei will face Liu Xu in the preliminary round of the tournament.

Li Wei Bin enters the flyweight tournament as the youngest competitor at only 18 years of age. He is a striking practitioner who has trained extensively in Sanda and Muay Thai.

Hao Yi Jie is a boxer and one of the best strikers in the country. He is also proficient in Sanda and Muay Thai and has won regional competitions in those disciplines. Hao Yi Jie will face Li Wei Bin in the preliminary round of the tournament which will be an interesting clash of two devastating strikers.