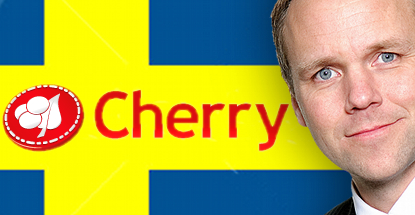 Swedish gaming operator Cherry AB has undergone a management shakeup, with CEO Emil Sunvisson (pictured) stepping down after three years at the helm. Fredrik Burvall, Cherry’s VP and CFO, will assume the role of Acting CEO. Board chairman Rolf Åkerlind extended his thanks to Sunivsson, who will continue to act in an advisory capacity for “a limited period of time.”

Åkerlind said Cherry wants to put more of an emphasis on its online gambling operations, which accounted for 59% of the company’s overall revenue in Q3 2014. Cherry, which also operates brick-and-mortar gaming and restaurants, makes the majority of its bones from Nordic markets.

Åkerlind said the company aims to boost its online efforts through both organic growth and acquisitions (like B2B subsidiary Yggdrasil Gaming) but the new focus means “the duties of the management team in Stockholm have changed.” The spotlight will now turn to the company’s Malta office, where Cherry’s largest shareholder Morten Klein has been appointed to a new role in business development and partnerships. Klein co-founded AutomatGruppen, which Cherry acquired in 2010.

Hallstedt said parents looking to keep gambling ads away from their kids faced a “considerable and unnecessary” challenge. As such, he suggested Sweden form an “informal unholy alliance” with online gambling operators, who would be asked to self-regulate their advertising practices. Specifically, Hallstedt wants companies to eliminate any adverts that kids are likely to see, including branding on athletic kit and anything involving youth sport activities.

Sweden has a long history of battling gambling ads, which critics suggest is less about harm reduction and more about curbing Svenska Spel’s competition. In April, the Lotteriinspektionen said nearly two-thirds of gambling adverts on Swedish TV were from ‘grey’ market operators. The Lotteriinspektionen also threatened the organizers of the Stockholm Marathon over its sponsorship deal with Unibet.

Sweden’s online gambling laws have been referred to the European Commission’s top court after the government failed to heed prior warnings that the laws were not being applied “in a systematic and consistent manner.” Sweden has publicly mused about reforming its online gambling environment but has taken little in the way of concrete action.