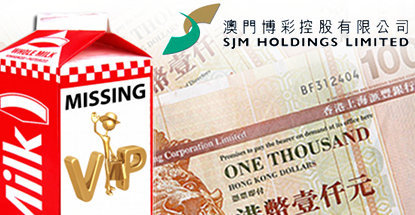 SJM’s year-to-date numbers are a little less severe, with profit (-4%), revenue (-1.6%) and earnings (-1.8%) reflecting the more lucrative first half of 2014. SJM CEO Ambrose So said his company had turned in a “decent” performance despite “well-publicized headwinds.”

These headwinds included a sustained period of Macau casino labor unrest in which SJM was a frequent target of public protests. The company agreed to two union demands during Q3, bonuses for casino staffers and the new ‘living subsidies’ program set to kick in next year, offering staff up to two months extra salary per year until 2020, when SJM’s casino concession comes up for renewal.

Analysts weren’t as understanding, with Credit Suisse suggesting the older pure-gambling casinos in SJM’s portfolio were “likely to underperform peers in this slower growth environment.” Construction of the Lisboa Palace, SJM’s first stab at a proper resort-casino, remains on schedule but the property won’t open until 2017. In the meantime, So said SJM plans to shift some of the Grand Lisboa’s VIP gaming tables to the premium mass segment and will add another 15 tables to the property “early next year.”