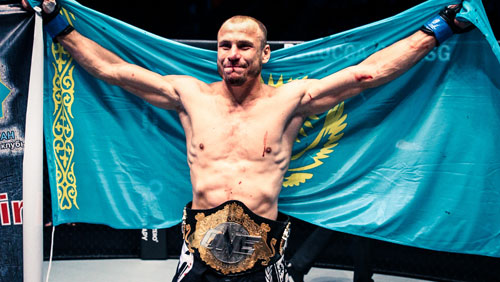 7 November 2014 – Singapore: Asia’s largest mixed martial arts organization with a 90% market share, ONE Fighting Championship™ (ONE FC), played host to a packed Singapore Indoor Stadium crowd for ONE FC: BATTLE OF LIONS, once again proving to be the undisputed king of Asian mixed martial arts. Fight fans cheered in excitement as they were treated to a night of world-class mixed martial arts action. In the main event of the evening, Igor Svirid was crowned the first ever ONE FC Middleweight World Champion by defeating Leandro Ataides by knockout.

Visit the official ONE FC: BATTLE OF LIONS photo gallery by clicking:

Igor Svirid needed just a few seconds to stop Leandro Ataides in the first round of a much awaited ONE FC Middleweight World Championship title fight. Svirid struck Ataides with a powerful right hand that dropped the Brazilian. Svirid then followed up with a few more strikes to his downed foe, clinching the exciting knockout victory and becoming the first ONE FC Middleweight World Champion.

In a tremendous showcase of heart and determination, Koji Ando came from behind to stop Zorobabel Moreira with a barrage of strikes in the third and final round. Moreira controlled much of the action in the first round with powerful leg kicks, keeping Ando at a distance. In the second, Ando closed the gap with his punching as Moreira continued to work on both the inside and outside leg kicks. The third saw both fighters trade shots at the center of the cage. Ando strung together a series of unanswered straights and uppercuts, causing the referee to stop the fight.

In a colossal clash of welterweights, Luis Santos of Brazil scored a spectacular stoppage victory over Bakhtiyar Abbasov, moments into the first round. Santos came out firing with a devastating display of strikes, landing a thunderous body kick that caused Abbasov to retreat to the mat in intense pain. Abbasov tapped out shortly after, prompting the referee to stop the fight.

With an amazing display of skill, Japanese MMA veteran Tatsuya Mizuno defeated Brayan Rafiq by Unanimous Decision after three rounds, in a grinding technical battle. Most of the first round was spent with both fighters pressed up against the cage. Rafiq opted to wrestle while Mizuno turned to Jiu-Jitsu, trying to secure a submission. Technical grappling action dominated the second round, with Rafiq continuing to stave off Mizuno’s various submission attempts. Mizuno and Rafiq picked up the pace with their striking in the third, to the delight of the crowd but both fighters were able to make it to the decision. In the end, all three judges scored the bout in favor of Mizuno.

Christophe Vandijck showcased his impressive Judo base by defeating Dwayne Hinds by ground and pound in round 1. Hinds controlled the tempo with his wrestling, but Vandijck was able to score on a couple of Judo throws, one of which saw him take full mount. Vandijck unleashed a series of powerful strikes from top position and forced Hinds to tap out, causing the referee to stop the contest.

In a highly-anticipated featherweight battle, Major Overall of the United States made quick work of the Philippines’ Cary Bullos, winning by Rear Naked Choke in round 1. Bullos and Overall wasted absolutely no time with a torrid exchange of strikes at the sound of the bell. Overall dropped Bullos with a kick and sent the Filipino crashing to the canvas. Overall then quickly secured the choke shortly after, forcing Bullos to tap out.

Martin Nguyen kept his unbeaten record alive, defeating Filipino fighter Rocky Batolbatol by submission in round 2. A heated striking battle ensued in round 1 as both fighters traded blows for the majority of the round. Nguyen scored on a couple of takedowns and landed some good kicks while Batolbatol used his boxing to pepper his opponent with hooks. In the second round, Nguyen took matters to the ground, working to take Batolbatol’s back and locked in a Rear Naked Choke to force the Filipino to tap out.

Hometown boy Amir Khan wowed the Singapore crowd with a quick stoppage of opponent Waqar Umar, landing a vicious right hand after a brief moment in the clinch. Umar dropped to the mat as Khan landed a couple more strikes for good measure before the referee stepped in to stop the fight in round 1, awarding Khan the knockout victory.

In the second bout of the evening, Jeff Huang of Chinese Taipei impressively defeated tough challenger Zuli Silawanto of Indonesia by submission in round 1. Huang dominated both the clinch and the ground battle as he unleashed a barrage of strikes from top position. Huang then seized the opportunity to take Silawanto’s back, locking in a Rear Naked Choke to seal the victory.

Two female fighters kicked off ONE FC: BATTLE OF LIONS in exciting fashion. Grappling was the method of choice for Singaporean female atomweight Kirstie Gannaway, as she defeated Malaysian opponent Adek Omar by submission. Gannaway used her rubber guard to trouble Omar with various submission attempts, before securing a deep triangle choke to force Omar to tap out in round 1.

Official results for ONE FC: BATTLE OF LIONS

Featherweight bout: Amir Khan defeats Waqar Umar by Knockout at 1:25 minutes of round 1