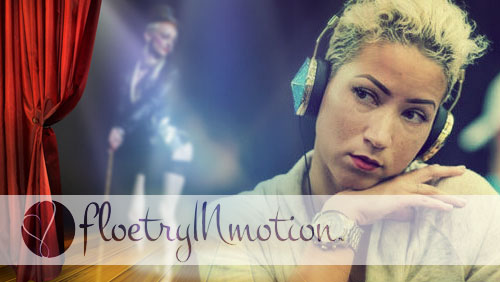 Ebony Kenney shows the poker world that she has just as many moves away from the table, as she does on it, with a sneak preview into her world of burlesque.

Why do women hate their bodies?

It’s not that I am searching for the answer. Instead, it’s the title of an article that I read recently, stating that over 80% of U.S. women are dissatisfied with their appearance.

It seems the problem has a lot to do with modern media and societal conditioning. The stick thin models that somehow manage to take up all the billboard space, magazine covers, and television shows, becoming icons of a generation.

According to the National Eating Disorders Association, 42% of first-to-third grade girls want to lose weight, and 81% of 10-year olds are afraid of being fat. The results of a poll taken by Teen magazine are no different, with 35% of girls, aged 6 to 12, having been on at least one diet, and 50 – 70% of them thinking they are overweight.

So if the Kate Moss brigade can cause this sort of mayhem, isn’t it possible for the reverse to be true. What would happen if we had more curvier, and confident role models?

This is what I love about Ebony Kenney.

The mother of two is doing her bit to show women that you should be proud of your body, and that curves should be celebrated. The former guest on Life Outside of Poker is a keen Burlesque Dancer, and she has recently published a video of her dance troop in action.

You should check it out, but before you do, I managed to grab hold of her for a few words and this is what she had to say.

How does it make you feel knowing that the entire poker community are going to see you shaking your thang?

I have zero qualms about the poker community, or anyone for that matter, seeing me “shake my thang.”

When you watch the video, how does it make you feel?

Even now, watching the video back, I feel excited, nervous and a sense of pride. Traci Black and the women of Floetry in Motion work damn hard and I’m happy to be a part of that.

What can burlesque dancing do for women?

Burlesque dancing can do so much for women. We’re not all born performers, but one thing it can do, for everyone involved, is create a deeper sense of awareness with one’s self. It can also just be a tension release, a girls’ night out, and just an overall fantastic time in general.

How nervous are you prior to a show?

On a scale of 1-10, I am a solid 8 in terms of nerves before the first performance. I have stage fright, but I use that to channel my energy into what I’m doing on stage. We always do multiple shows throughout a night, and generally speaking, the nerves are gone after the first set.

How do you remember all of those moves?

I have a knack for remembering choreography, but I am not a trained dancer – not as a child anyway. I didn’t start dancing until I was 19 – when I became a cheerleader/dancer for an arena football team – and that’s when I realized I had an edge as far as remembering and executing all types of choreography. Not to mention, we practice hours and hours leading up to a performance!

Name one poker guy you would love to see shaking their thang?

That is going to be tough because when I think of poker guys, them shaking their thing is not usually the first thing that pops into my head. However, anyone with some solid dancing skills should just email me. Maybe we can create a Dancing With The Stars Poker Edition?

Are you more comfortable with your body now, than ever before?

This is an answer that varies depending on how I’m feeling on any given day. As comfortable as I may seem, I’m still a woman. We are our own biggest critic. But, today, yeah, I’m feeling pretty damn great.

What have you been up to in the poker world?

A little bit of everything. I just finished shooting some stuff with Michael “The Grinder” Mizrachi, David Williams, and Liz Lieu for Twistory Studios and WPT. Also, doing a couple podcasting segments with Joey Ingram.  Oh and trying to find my place in a hosting/commentator position while fighting the urge to play every tournament that comes around.

What have you been up to outside of the poker world?

Outside of poker, I have joined forces with FitNation magazine to do some hosting/TV segments for their growing brand, and beating the door down everywhere else to find a long-term position now that my first hosting gig has ended. I’ve also just signed on to do a film here in Florida, which I’m extremely excited about. Spoiler alert: I may/may not be involved in a murder scene!