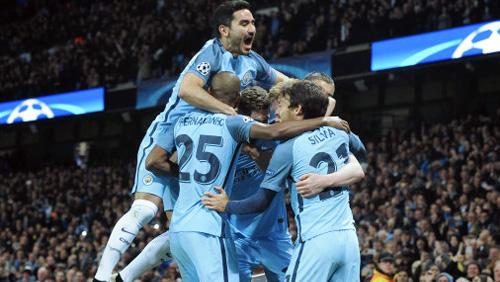 Lee Davy brings you an update on Match Day 4 of the UEFA Champions League including a defeat for Barcelona, another win for Arsenal, and the Leicester dream lives on.


Barcelona is still the bookmakers favourite to win the UEFA Champions League despite a humbling 3-1 defeat away to Manchester City at the Etihad Stadium.

City put four past West Brom, at the weekend, to signify the end of a six-game winless run. Ilkay Gundogan, who scored twice in that match, told the press afterwards, ‘this is where our season begins.’

It was a bold statement from Gundogan. City’s next fixture was against Barcelona.

The response from Pep Guardiola’s men, in the wake of their 4-0 thrashing at the Nou Camp, was made all the more remarkable when they went a goal down in the 21st minute after a rapid-fire counter-attack finished by the man who put three past them a fortnight ago, Lionel Messi.

It is at this point that British teams of the past would have faded, Barca’s front three would have created havoc, and we would have had a cricket score. It seems Guardiola has them ticking from a psychological standpoint and not just a physical one.

They were level at half time thanks to a sloppy piece of defending from Sergi Roberto allowed Raheem Sterling to set Gundogan up for the equaliser. Six minutes after half-time Kevin De Bruyne sent a free kick into the roof of the net before Gundogan sealed the victory with his second of the game with 16-minutes left to play.

In the group’s other game, Celtic grabbed a point away at Borussia Monchengladbach to keep their Europa League qualification hopes alive but the only question left to answer in this group is who will finish top: Barcelona or Man City?

Arsenal booked their place in the last 16 after a spirited fightback away to Ludogorets. Arsenal arrived in Bulgaria on the back of a run of 14 games without defeat, including slamming six past their opponents the last time they met.

It should have been a dead cert.

Ludogorets raced into a two-goal lead as early as the 15th minute thanks to strikes by Jonathan Cafu and Claudio Keseru but went into the half-time interval on an even keel thanks to Granit Xhaka’s first-ever Champions League goal and a third in two games from the returning Olivier Giroud.

The winner, scored by Mesut Ozil in the 87th minute, was world class. Racing through on goal, Ozil chipped the ball over the head of the onrushing keeper and then dummied two defenders before passing the ball into an empty net. It was his fourth of the competition, all scored against the Bulgarians.

Joining Arsenal in the knockout stages is Paris St Germain. The French champions beat FC Basel by 2-1 to set up a mouthwatering tie against Arsenal at The Emirates in a fortnight’s time that will surely determine who will top the group.

Last year’s runners-up, Atletico Madrid, are through to the knockout stages after maintaining their 100% record at home to FC Rostov, but they left it very late indeed.

Diego Simeone’s side, who are searching for a third Champions League final appearance in the past four seasons, went ahead in the 28th minute thanks to a quality piece of improvisation from Antoine Griezmann – the Frenchman shifting his body position in mid-air to volley the opening goal past the Rostov keeper. Rostov grabbed a surprise equaliser in the 30th minute, but it was Griezmann who sealed the win in injury time with another smart finish.

Joining Atletico in the knockout stages will be the German giants Bayern Munich. The bookie’s second favourites to win the lot beat PSV Eindhoven by 2-1 in the Netherlands thanks to two goals from Robert Lewandowski. The Pole has now scored four times in this year’s competition.

The champions, Real Madrid, blew the chance to seal their place in the last 16 after playing out a frustrating draw away to Legia Warsaw. The game – played behind closed doors – was almost a fairytale for Warsaw as they came from two goals behind to take a 3-2 lead until Mateo Kovacic scored the equaliser with time running out. Madrid star Gareth Bale, who recently signed a £600,000 a week deal to see out the rest of his career at The Bernabeu, opened the scoring with a pearler from the edge of the box. Karim Benzema also got onto the scoresheet.

Borussia Dortmund did make it through to the last 16. The Germans beat Sporting Lisbon by 1-0 at home thanks to a 12th-minute goal from Adrian Ramos. The striker was in the side after Dortmund coach, Thomas Tuchel, dropped star striker Pierre-Emerick Aubameyang for ‘internal reasons.’ Aubameyang has scored ten goals in 13 matches this season.

Leicester Heading in The Right Direction; Spurs Are Not

The Leicester City fairytale continued after a battling goalless draw in Copenhagen. The Foxes are still yet to concede in their opening four matches and are on course to be the first team to qualify for the last 16 without conceding a goal. A point from either of their final two games will see Claudio Ranieri’s men reach the knockout stages at the first time of asking.

If Spurs are going to be joining their Premier League counterparts in the last 16, it’s highly likely that they will have to win their final two games after another Wembley loss this week.

Spurs 1-0 home defeat against Bayer Leverkusen is their sixth loss at Wembley, and they are now trailing both Monaco and the Germans in the group. Spurs, who remain undefeated in the Premier League, have not won a match in all competition for six games.

Here are the other group tables:

*All odds courtesy of Bodog