Home / Poker / Poker And The Art of Negative Visualisation 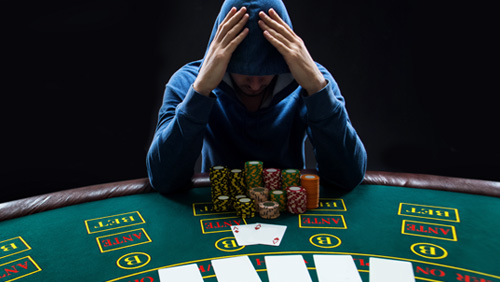 At a time when a positive mental attitude is all the rage, Lee Davy, proposes that we take the contrarian view and instead think about all the things that could go wrong when we sit down for a game of poker.


Somewhere in the universe another life form finally takes an interest in us. They create an Android and send him into the masses to figure out what makes us tick. The first person the Android meets is a professional poker player.

After spending weeks with the poker player, the Android is asked to send an update to its Mothership, and it looks a little something like this.

And then comes the contradiction.

“So you are going to win easily then?”

Psychologist Gary Klein is the man responsible for coining the term premortem. As you can imagine, a premortem is the opposite of a postmortem. You don’t wait until a thing has died to figure out how it died. Instead, you do the work ahead of time and evaluate all of the potential reasons a thing can die.

Proactive behaviour like this is spreading like wildfire through the world of business. Thanks to people like Klein, project teams are now established to identify all the possible ways a project can fail so they can try and plug the leaks before they arise.

It’s the same as learning from your mistakes; only you don’t have to make any.

An Astronauts Guide to Life on Earth

“Just taking risks for risk’s sake, that doesn’t work for me,” wrote Hadfield, “I’m willing to take risks that I think are worth it, and I’ve worked so hard to make sure that I survive.”


Hadfield spent plenty of time figuring out what made the hair on the back of his neck stand to attention. It was always a fear of the unknown. How are you going to react when faced with a particular set of circumstances? Why wait to find out. Make it happen today in a controlled environment.

Long before Klein and Hadfield started to proactively create premortem in their lives the ancient Stoic philosophers such as Marcus Aurelius, Epictetus and Seneca were doing likewise. They would start each day by reminding themselves of all the horrors that could befall them before the moon came out to play.

It was a stark lesson in control. The ancient Stoics were quick to realise that there are so many external factors in the world that are beyond our control. In fact, there is only one thing we do control – our mind.

The Stoics called this practice Premeditatio Malorum (premeditation of evils)

All the great poker players have learned the art of premortem and practice it daily. It’s the behaviour that the Android witnessed. It’s not a contradiction. It’s an acceptance of the boundaries of control.

The great poker players know they can’t control the deck, nor can they control the actions of their opponents. The only thing they can control is the choice they make every second they spend at the table.

When a poker player enters a tournament with 3,000 players, they start by telling themselves that the day will probably end up being a rather shitty day. They will lose more hands than they will win, and someone vastly less skilful will probably knock them out of the tournament.

At the same time, they retain a quiet confidence in their abilities but can separate ability from external factors beyond their control. They are managing expectations. They are creating internal backup plans for when they lose flip after flip. They are anticipating all of the coolers, bad beats and swings and are telling themselves that it’s all part of the game.

It’s a practice you should use, not only in poker but life.

When you wake up, each morning ask yourself what obstacles are going to get in your way and then figure out ways to remove or manoeuvre those barriers.

If you don’t practice premortem, then there is only one obstacle standing in your way.

The Ghost of the Boatman: He Played For His Wife book review (not really)
Lee Davy
20 December 2017