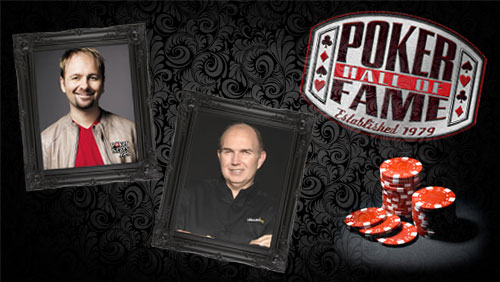 The 2014 class of the Poker Hall of Fame was announced today. Both 40-year-old Canadian poker pro Daniel Negreanu and 61-year-old retired tournament director Jack McClelland have been selected to join the Hall, bringing the number of living members of the Hall up to 23. They will be inducted during a ceremony at Binion’s in downtown Las Vegas on November 9th prior to the resumption of the WSOP Main Event. Fellow nominees Chris Bjorin, Humberto Brenes, Bruno Fitoussi, Ted Forrest, Jennifer Harman, Bob Hooks, Mike Matusow and Huckleberry Seed will have to go through the nomination process again if they want to join the select club.

With the exception of a handful of specific tournament titles he hasn’t captured, there’s essentially nothing that Daniel Negreanu hasn’t accomplished during his three decades at the poker tables. He was the World Poker Tour Player of the Year in its second season, when he won two events and took third in another. He’s the only player ever to win the WSOP Player of the Year twice – one in 2004, the first year the award was given away, and again in 2013, after winning the fifth and sixth bracelets of his career. After taking second place in this year’s Big One For One Drop at the WSOP and winning $8.2 million, he moved to the top of the all-time money list not just for his native Canada but for all poker players with just shy of $30 million in career earnings. And he’s been the public face of PokerStars for seven years now, an eternity in the rough-and-tumble world of poker sponsorship. Now he is only the second player ever to be inducted at the age of 40, matching the legendary Chip Reese.

Jack McClelland both played in and dealt at live poker games during his career, but his selection to the Hall Of Fame comes because of his presence behind the scenes at major poker tournaments. Prior to his retirement in 2013, he had a hand in some of the biggest developments in tournament poker during a key time in the game’s growth. He worked with Jim Albrecht to guide the WSOP during the 1990s, which prior to the poker boom of the 2000s was the game’s original period of unprecedented expansion. Then he followed that up by taking over tournament operations at the Bellagio just as the World Poker Tour era began, turning that site’s operations into the gold standard for how tournaments were supposed to be run. With a hand in running tourneys at the Commerce Casino in Los Angeles plus the biggest Vegas events, as well as in more exotic destinations like Aruba and Cyprus, his impact on tournament operations can’t be understated.

McClelland’s induction keeps with a recent trend of key figures being recognized for contributions on the operations side of the business. Much like Eric Drache (2012), one of three Hall members with whom he worked during his storied career as a tournament director, or Linda Johnson (2013), whose value to the game in various capacities promoting it matched her accomplishments at the table, McClelland’s legacy in the game others play today is what’s being recognized.

On the player side, though, Negreanu represents a bit of a departure from recent trends and a look into the near future. The past few years have seen the induction mostly of players from the earliest eras of the game, like 1982 WSOP Main Event winner Tom McEvoy, who earned his spot in 2013, and 1975 Main Event champ Brian “Sailor” Roberts, who passed away 17 years prior to his inclusion in the Hall in 2012. Even the Class of 2010’s Erik Seidel got his start in the 1980s. But Negreanu is the first of a wave of Hall-worthy players reaching age 40 who got their start playing in the mid-to-late 1990s – his first tournament win came in 1997, and his first WSOP bracelet the following year. At least one other (Phil Ivey) looks like a lock for a first-ballot induction in the near future. Within the next decade others who made their names and reputations during the poker boom years will become eligible, and at least a few are likely be selected.

It’s worth noting that the Poker Hall Of Fame remains an honor with no physical counterpart. Unlike the professional sports, which have shrines to the players and others who have made their games great, poker has no museum dedicated to the game’s most indelible figures. And that’s a shame. There’s been a lot of money made off the trail they blazed, but nobody has ever set aside the relatively paltry sum it would take to make a nice, physical home for the Hall. It’s about time poker players and fans had a site to visit that gives all of the game’s pioneers and superstars a home worthy of their accomplishments.