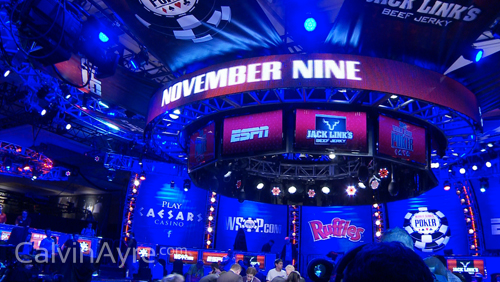 With the November Nine now finally finished with their long-delayed tournament, the 2013 WSOP has officially drawn to a close – and it was one for the record books.

The addition of WSOP APAC made this year the most bracelet-laden in Series history. Six bracelets were awarded in open events in Australia and seven in Europe, bringing the total for the entire 2013 WSOP to 72. Daniel Negreanu became the first two-time WSOP Player of the Year winner, his fellow former POY Tom Schneider won two bracelets, Phil Ivey won his ninth bracelet, and Ryan Riess won the Main Event to become poker’s newest world champion. Here’s a look back at some of the top performers and storylines from this year’s action.

Daniel Negreanu  – Kid Poker closed out his 30s in style, putting together a stellar year across the three WSOP installments in Australia, Europe, and Las Vegas to win his second WSOP POY crown. All together, he cashed in 10 events with four final table appearances and two wins. Notably, the WSOP APAC Main Event and WSOP Europe High Roller victories were the third- and fifth-largest prizes of Negreanu’s long career.

Jeremy Ausmus – The former November Niner won his first bracelet in Europe in the $1,500 Pot Limit Omaha and cashed in nine other events, including the final table of the $3,000 Mix-Max No Limit Hold’em, for $609,080 total winnings.

Tom Schneider – The 2007 WSOP POY winner earned two bracelets ($1,500 HORSE and $5,000 HORSE) for the two biggest tournament win of his career, marking the second time he’s won two bracelets in one WSOP. He cashed in five other events for $604,698 total winnings.

Phil Ivey – won his ninth career bracelet in the $2,000 Mixed Event at WSOP APAC, tying him for fourth all-time with Johnny Moss

Barny Boatman – after 13 years of cashes finally won his first bracelet in a $1,500 No Limit Hold’em event

Phil Hellmuth – 13-time bracelet winner cashed four times, including the 100th of his career, to extend his lead for most cashes all-time to 17

Canadians – won 11 bracelets total, the most ever by a country other than the United States

This year’s Main Event drew 6,352 players, the smallest field since 5,619 showed up to play in 2005 but still the sixth-largest all-time. Ryan Riess won the tournament, becoming the 37th player to lay claim to poker’s world championship.

Riess entered the final table fifth in chips. True to his predictions during the hiatus before the November Nine portion of the tournament, he came back to win in convincing fashion. He took out Amir Lehavot in third place after amateur Jay Farber gobbled up the chip stacks of J.C. Tran and Sylvain Loosli to set up the heads-up match. Once there he erased his incoming deficit and dominated the latter portion of the duel with Farber, finally closing him out with A-K against Q-5.

Along with three other cashes this summer, Riess’ total winnings for the 2013 WSOP came to $8,390,101. He immediately shot to 29th on the all-time money list with the win – and all of his winnings have come since a second-place finish at the October 2012 WSOP Circuit Main Event in Hammond, Indiana.