Phil Ivey, one of modern poker’s only true superstars, pushed his way further into the history books this week with a gold bracelet win at the World Series of Poker Asia-Pacific at Crown Casino in Melbourne, Australia. In doing so he tied one of the game’s enduring legends and embodied how the game has changed over the decades. 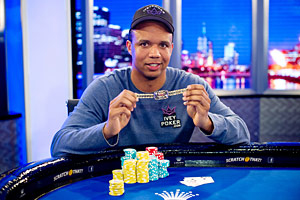 Ivey’s victory came in the $2,200 Mixed Game tournament, the third event of WSOP APAC. Featuring a mix of eight different games – including no-limit hold’em, limit hold’em, pot-limit Omaha, Omaha hi-lo, seven-card stud, stud hi-lo, Razz, and 2-7 triple draw  – the event was a true test of poker skill despite drawing only 81 players. Ivey, already fifth on the all-time WSOP list with eight bracelets, accumulated more chips than any other player over the first two days of the tournament and led fellow pro Daniel Negreanu coming into the final table. The heads-up match saw him battle with Brandon Wong for 178 hands over the course of three hours. Wong, who was actually ahead as the final duel began, was close to putting Ivey away once he had built a 4-to-1 chip advantage. But almost as soon as he was down, the masterful pro found a way back into the game. Wong later missed a crucial draw and the result of the tournament became a foregone conclusion. Moments later, Phil Ivey ended the tournament and claimed the ninth gold bracelet of his career.

After skipping the WSOP in 2011 following the fallout from Full Tilt Poker on Black Friday, Ivey returned to the Rio tables with a vengeance in 2012. He made five final tables and looked like the early favorite for Player Of The Year, but by the end of the Series he was still stuck on eight lifetime victories thanks to second-, third-, fifth-, seventh-, and eighth-place finishes. He referred to that when talking to the media after this week’s victory. “I definitely wanted to win this event, especially when I got deep and realized I had a chance, because my last five final tables were very tough,” Ivey said. “It took a lot out of me, and I was happy to have the chance to finish this one.”

With his ninth victory now in hand, Phil Ivey has tied the legendary Johnny Moss. Ivey has more in common with Moss than just sharing a bracelet total with him for a moment in time. Both picked up the game early, Moss at age 10 in Odessa, Texas, and Ivey as a teenager in Atlantic City. Both players were recognized by their peers as undisputed masters of the game. Both were feared at the cash game tables and renowned for their triumphs in legendary heads-up sessions, Moss against Nick “The Greek” Dandolos and Ivey agaisnt billionaire banker Andy Beal. And both saw poker tournaments as being of secondary importance at best compared to the games where the real money was. At least, Ivey used to. It’s possible that things could have stayed that way, too, had he not come of age during the biggest explosion of popularity the game has ever known.

When Phil Ivey won his first gold bracelet in 2000, the ethos of the game’s pros had changed very little in many ways from Moss’ heyday. Tournaments were mostly just an excuse to get together and play cash games among whoever didn’t make it deep. They rarely had more than a few hundred players in the field and certainly weren’t much of a factor in determining one’s poker legacy. Moss wasn’t considered the “Grand Old Man Of Poker” because of the WSOP; in fact, the WSOP was considered legitimate partly because of his participation.

Had he come up a decade earlier, Ivey might have continued to focus on cash games the way he did early on in his career. But unlike Moss, he lived to see the WSOP turn into one of the single greatest arbiters of a poker player’s impact on the game. Cash games don’t get the attention tournaments do today, which is good: a cash game isn’t really anybody’s business who isn’t sitting in it. Tournaments level the playing field in a way that makes the game more like a sport. There’s a reason that a vote among players was only used to determine the inaugural WSOP champion. It’s a lot easier to have a discussion about who the best player really is when everybody starts from the same point.

Though he may be rooted in the old-school ethos, Ivey is cognizant of how tournament performances affect a player’s legacy in the modern era. “As I’ve gotten older,” he told ESPN after his victory, “I’ve started to think about my place in poker history and where I’m going to stand, so it is important to me to win these bracelets.” It’s the kind of quote you never would have heard from Johnny Moss. And it says Phil Ivey is going to be a story worth following every time he takes a seat in a WSOP event for the rest of his life.