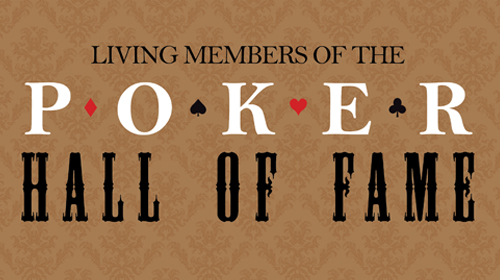 From its very beginning in 1979, the Poker Hall of Fame has been divided into its living members and those who have passed on. Among the ranks of its first class were the deceased gambler Nick “The Greek” Dandolos, Wild West gunslinger and card sharp Wil Bill Hickok, and early card game rule codifier Edmund Hoyle, along with four living members led by the legendary Johnny Moss. Throughout the 1970s Moss had set the standard for greatness in poker, one that today’s living members of the Hall of Fame continue to uphold.

Johnny Moss was there for the inaugural World Series of Poker in 1970 and was a fixture throughout the tournament’s formative decade. Two others from the early days who have been inducted into the Hall of Fame, Doyle Brunson (Class of 1988) and CrandellAddington (Class of 2005), are still with us today even as that era recedes into history.

Moss won nine WSOP bracelets in his career, seven of them in the 1970s alone. Among today’s living members of the Poker Hall of Fame are the first three players ever to have surpassed his total. Johnny Chan, a 2002 inductee to the Hall, was the first to win 10 bracelets, picking his up in 2005. Days later he was tied as the new record holder by Doyle Brunson. And those two were tied the following year when Phil Hellmuth, who would be inducted to the Hall in 2007, earned his tenth. All three of those players are past Main Event champions just like Moss, too, a feat they’re joined in having accomplished by fellow living Hall members Bobby Baldwin (Class of 2003), Berry Johnston (Class of 2004), Dan Harrington (Class of 2010), Tom McEvoy (Class of 2013), and Scotty Nguyen (Class of 2013).

Mister Moss was also renowned for his skills as a cash game player – in fact, some of modern poker’s deepest myths feature the Grand Old Man as a central figure. The list of today’s living members of the Hall is stacked with winners from the world’s biggest cash games. Mike Sexton (Class of 2009) has played in high-stakes cash games for decades, since long before he was known as the host of the World Poker Tour. And Doyle Brunson, Lyle Berman (Class of 2002), and Barry Greenstein (class of 2011) have all been regulars in the mixed games at Bobby’s Room in the Bellagio, a venue named after their fellow Hall member (and MGM-Mirage CEO) Bobby Baldwin.

Not all of the living members of the Poker Hall of Fame have been inducted because of their exploits on the felt. The criteria for inclusion in the Hall makes a specific allowance for non-players who have “contributed to the overall growth and success of the game of poker, with indelible positive and lasting results.” Jack Binion of the Hall’s Class of 2005 may have the greatest ambassador clause claim of all the living members, being the man who guided the WSOP from its infancy into tournament poker’s world championship.

More members from the non-player category have been inducted in recent years, particularly in connection with the poker boom of the early 2000s, like hole-cam inventor and television producer Henry Orenstein (Class of 2008); World Poker Tour host Sexton; former WSOP tournament director and television producer Eric Drache (Class of 2012); and poker columnist, original WPT studio announcer, former Card Player Magazine publisher, and Tournament Directors Association co-founder Linda Johnson (Class of 2011). Even though members from this category aren’t required to have a record of success at the tables, it’s fitting that most of them do; Orenstein, Sexton, and Johnson, do own gold WSOP bracelets, and Drache has finished in second place at WSOP Seven-Card Stud events three different times over the years.

Of course, today’s living members of the Hall aren’t just living up to the standards from 35 years ago – they’re often surpassing them. Besides the group of three players with more bracelets than Moss won in his career, others have set standards of their own for future players to live up to. Tom McEvoy became the first satellite winner to win the Main Event in 1983. Dan Harrington made history by appearing at the Main Event final table in both 2003 and 2004, which were easily the two largest fields the tournament had ever seen up to that point. Scotty Nguyen is the only player to have won both the Main Event and the $50,000 Poker Players Championship during its nine-year existence. And then there’s Phil Hellmuth, who is the only player ever to cash in 100 WSOP events; win 13 WSOP bracelets; and win both the WSOP Main Event and WSOP Europe Main Event.

No matter how they’re measured, the living members of the Poker Hall of Fame have lived up to the traditions of greatness set by its founding members. And they’ve blazed their own trails, too, raising the bar for what it means to be worthy of induction to the most elite society in the game.