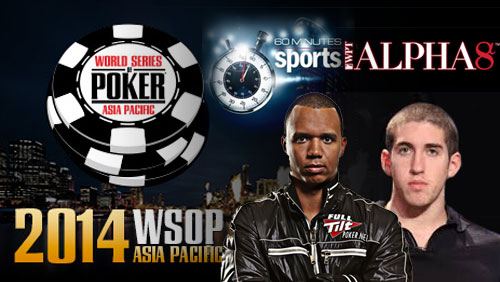 Lee Davy reduces a week long hive of poker activity, into a much more manageable chunk of 1,000 words containing sentences about the champagne supernova antics of Dan Colman, one of Phil Ivey’s baddest ever beats, the ever dwindling numbers at the World Series of Poker in Australia, a whole lot of chatter about court cases, and the tiny Mediterranean island of Malta.

It’s the year 3059 and Isai Scheinberg is playing a game of Trivial Pursuits with his umpteenth child (he invested heavily in cryopreservation techniques).

“Who holds the record for the most money won in a single year playing live multi-table tournaments, and never once smiled in a winners photo?” Asks Scheinberg’s child.

You never realize you are in the midst of it, but ladies and gentlemen, that is exactly what’s happening right before our very eyes. Dan Colman continues to expand his annual earnings record, and I don’t think it will be broken by the time my body is put on ice.

His latest victory came in London. It was the first World Poker Tour (WPT) Alpha8 event of Season II, and fortunately for the WPT it was also the only event not to be televised – so their was no need for an excuse as to why their winner would not give a post match interview.

Colman bought in twice for a combined total of £120,000, and after he had defeated Max Altergott, in heads-up action, he walked away with £480,000 in profit. That’s four major titles for Colman in 2014 alone, but more impressive is his record winnings total – $22 million dollars.

The Australians Fail to Show up for the WSOP

“What WSOP series boasts the lowest overall attendances since they widened their brand to the rest of the world?” Asks Scheinberg.

It looks like that dubious honor will go to the 2014 World Series of Poker Asia Pacific (WSOP-APAC) after only 1,611 players have turned up for the first seven events of the 10-event series.

The fact that players are capturing precious gold bracelets as easily as children catch a cold on a Monday morning, is really riling some people, with a collection of pros going to twitter to vent their displeasure at the current goings on Down Under.

The aforementioned Dan Colman was in London because of the European Poker Tour (EPT), and although it’s bound to have an effect on the lack of numbers where people like to throw shrimps on the Barbie, the finger can only be pointed in one direction – the Australian public.

The same group of players who seem to come out en masse for the Aussie Millions, seemed to be sitting this one out, making the WSOP’s decision to choose Australia over Europe the wrong one right now.

On a more positive note: Jeff Lisandro was one of those fortunate to be in the right place at the right time by winning his sixth bracelet; Phil Hellmuth made his record breaking 108th cash, and 51st final table, when he finished fourth in Event #7; and the Player of the Year race between George Danzer and Brandon Shack-Harris is keeping everyone interested.

Phil Ivey once said that Melbourne’s Crown Casino was his favorite place to play poker, and boy does he wish he was there right now.

It was an important week for Ivey. The usually interview-shy piece of poker perfection was making a special appearance on Showtime’s 60 Minute Sports, and he was also scheduled to stand before The Beak, in one of London’s High Courts, where he would go heads-up with the Genting owned Crockford’s Casino.

The 60 Minutes Sports special was important to Ivey. Money will come and go, but reputation? That shit sticks like a toffee apple in Antonio Esfandiari’s hand as he runs naked through Burning Man. The whole point of the TV interview was to show the world that Ivey can be trusted, he is not a cheat, he should still be known as the greatest poker player in the world. Even the Judge who knocked him upside his head told the world that Ivey was an honest guy.

So Ivey won’t get the £7.8m he won at Crockford’s, and he probably will have to pay back the $9m+ that he won at Borgata – but in the eyes of the poker community he is not a cheat.

He has never been more trustworthy.

The GBGA Lose Their High Court Battle Against the UKGC

“What does the GBGA stand for?” Asks Scheinberg.

Phil Ivey is not the only member of the gambling community who has been digging deep inside their pocket to search for court costs.

The Gibraltar Betting and Gaming Association (GBGA) lost their High Court battle against the UK Gambling Commission’s (UKGC) attempts to move forward with the implementation of the new Gambling (Licensing and Advertising) Act 2014 this week.

High Court Lord Justice, Nicholas Green, decided that the GBGA’s counter-proposed ‘passporting’ idea was neither good enough or needed, and that the GBGA had not done enough to prove that the new law would create a series of illegal online gaming networks intent on causing havoc.

When the gavel went down it was confirmed that the new law will be implemented on Nov 1, the 15% point of consumption tax (POC) will go ahead on Dec 1, and the GBGA would have to pay £100,000 to cover the UKGC’s court costs.

“What poker player holds the record for cramming the most people into a winners photo?” Asks the child.

Isai Scheinberg, founder of PokerStars, managed to squeeze close to a 1,000 people into his winner’s photograph, after topping a field of 17-entrants in the £2,200 United Kingdom & Ireland Poker Tour (UKIPT) High Roller in the Isle of Man.

The billionaire defeated Vicente Delgado, in heads-up action, to capture the first prize of £13,850, and one hopes to see more of him now he has moved his assets onto Amaya Gaming Ltd.

From one tiny island to another, and Malta is set to become the epicenter of poker, in March 2015, after the EPT and Global Poker Index (GPI) announced plans to invade the place.

Malta is the base for Alex Dreyfus and his team of hotshots over at the GPI, and it was also revealed that the ranking system will host three important events during the EPT Festival. The only one of the three to so far have a date is the 14th incarnation of the GPI European Poker Awards (GPA). The awards ceremony will take place on the 25th March 2015.

“At the  2015 GPI European Poker Awards, who won the award for Most People Crammed into a Winners Photo?” Asks Scheinberg.