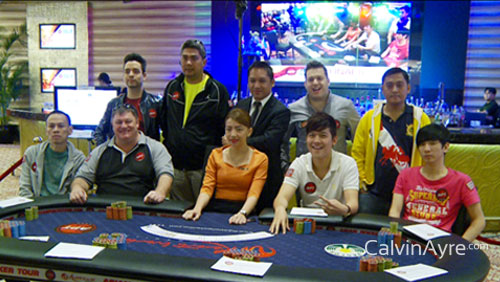 From 300 entries, down to 8 players! That’s how the last day of the 4-day APT Asian Series Manila went down at the Resorts World Manila.

Angelia Ong brings us the highlights from the final table as the final 8 players battle it out for the title and the prize money close to $100,000. With the table dominated by Filipinos, fans definitely were present the whole time to cheer for their hometown favorites.

Unfortunately, for the player of the year Sam Razavi, his quest for a main event win will have to wait as he settles for 3rd place.

The crowd just went wild as two Filipinos, Mike Takayama and Jay Lubas filled the seats and played intense hands, which kept the fans at the edge of their seats.

In the end, Mike Takayama wins the title along with the cash prize. Mike said he was so happy that all his sacrifices paid off even with all the good players that he had to go against.

As the event ends, APT Tournament Director Lloyd Fontillas gave thank for the overwhelming success of the event.