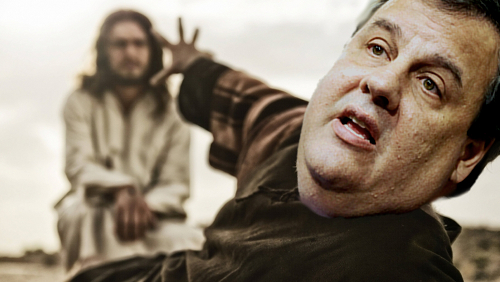 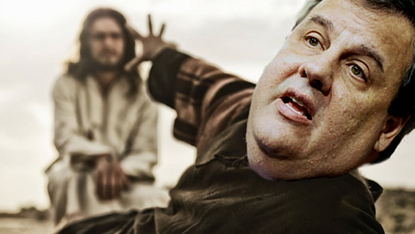 New Jersey Gov. Chris Christie (pictured, surrendering to destiny) has officially authorized Atlantic City casinos and state racetracks to begin offering legal sports betting, reversing the stance Christie took just one month ago when he vetoed a bill that would have allowed an identical betting regime.

On Monday, Christie said he’d authorized acting state Attorney General John Hoffman to issue a directive saying casinos and tracks could start offering legal wagers as soon as they were physically capable of doing so. The only caveat Christie gave was that the casino and tracks don’t take wagers on collegiate sporting events taking place within the state or involving a New Jersey college team playing beyond state borders.

State Sen. Ray Lesniak (whom we believe is the figure confronting Christie in that pic), a strong gambling supporter and author of the bill Christie vetoed in August, celebrated Christie’s ‘road to Damascus’ moment by proclaiming “Victory at last!” and warning bettors to book their AC hotel rooms now to avoid the Super Bowl rush in February. Lesniak said it was good that Christie had “reversed course” after “vetoing my legislation that would have achieved the same goal.”

SO WHO SPIKED CHRISTIE’S GATORADE?
Christie said he’d taken his cue from statements made during the state’s lengthy court fight with the US Department of Justice, four pro sports leagues and the NCAA, in which the state was told that there was nothing in the 1992 federal PASPA sports betting prohibition preventing the state from simply choosing not to enforce its own anti-betting laws.

But those exact same statements were the foundation on which Lesniak’s latest bill was crafted, leaving open the question as to what happened since the August veto to change Christie’s mind. It probably didn’t hurt that Adam Silver, commissioner of the National Basketball Association, one of the leagues that fought New Jersey’s sports betting push, publicly stated last Thursday that the spread of legal sports bets across the US was “inevitable” and that the NBA would benefit from this spread.

But Christie’s change of heart likely came from his political need to be seen to be doing something to arrest the state’s economic slide. Christie’s news came the same day he convened a summit of the state’s gaming stakeholders to discuss ways of changing the doom-and-gloom narrative that has seen three AC casinos close their doors this year, with a fourth casino scheduled to do so next week and a fifth threatening to do so before the year’s end.

The casino closures will put around 10k workers on the dole, which will have a ripple effect on other area businesses. Christie was also facing the slim possibility that state legislators – who’d overwhelmingly supported Lesniak’s most recent legislation – had scheduled a Sept. 22 vote on whether to override Christie’s veto, which would have marked the first such open revolt during Christie’s tenure as governor.

NOT SO FAST…
The state Attorney General’s Office has also filed a motion in federal court asking US District Judge Michael Shipp to confirm that the state’s actions fall within the parameters of the Feb. 2013 injunction that blocked the state’s original sports betting licensing program. That motion is to be considered on Oct. 6 and Lesniak believes the state’s would-be betting operators would likely hold off taking their first wagers until Shipp had officially signed off on the plan.

Regardless of how Shipp rules, the DOJ and their league allies will most assuredly resume their legal efforts to block the state’s sports betting plans. It remains to be seen how many casino operators with business in other states are willing to tempt fate by offering bets of dubious legality but Monmouth Park racetrack, which has been chomping at the bit to offer sports bets alongside racing wagers, issued a statement on Monday saying it planned to roll out its new option “in the very, very near future.”

Lesniak rejected suggestions that a sports betting regime that required the state not to regulate the activity would create anarchy. Lesniak reminded NJ.com that the state retained the power to license the casinos and tracks’ overall operations, which afforded the state plenty of options both for protecting consumers and cracking the whip (should the need arise) on operators.