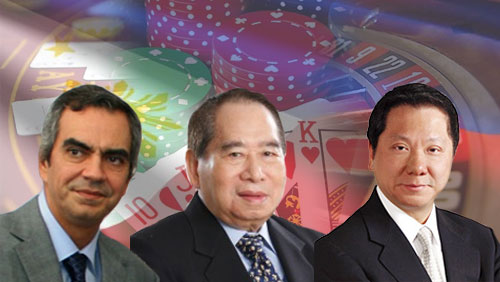 Three of the five richest Filipinos named by Forbes magazine share something in common other than their fat bank accounts. Henry Sy (1st), Enrique Razon Jr. (3rd), and Andrew Tan (4th) are all involved in the blossoming casino industry in the Philippines.

For the seventh year in a row, Henry Sy was named the richest Filipino with an estimated net worth of $12.7 billion, more than double what runner-up Lucio Tan is worth at $6.7 billion.

Sy is recognized as the founder of the country’s largest mall operator in the Philippines but his family also controls Premium Leisure and Amusement Corp, which is part of a consortium with Melco Crown (Philippines) Resorts Corp., the subsidiary of Melco Crown Entertainment that owns City of Dreams Manila.

Coming in at third place with an estimated net worth of $5.2 billion is port magnate Enrique Razon Jr. Razon is the chairman of Bloomberry Resorts Corp, which owns Solaire Resort & Casino. Razon’s venture into the casino industry pays off handsomely after Bloomberry reported a dramatic rise in revenue in the second quarter of 2014. That played a big part in the spike in Razon’s net worth from $4.5 billion last year to $5.2 billion this year.

Just a shade under Razon is Andrew Tan, chairman and CEO of Alliance Global Group Inc., with an estimated net worth of $5.1 billion. Tan’s Alliance Global company is a joint investor with Genting Hong Kong in Resorts World Manila as well as Resorts World Bayshore, which will open in 2016.

Coming in at fifth is John Gokonwei with an estimated net worth of $4.9 billion. Gokongwei was once linked to Kazuo Okada’s Manila Bay Resorts project.

The only man without any casino ties in the top 5 of richest Filipinos is Lucio Tan. Then again, if your net worth is estimated at $6.1 billion, you’re probably doing something right.