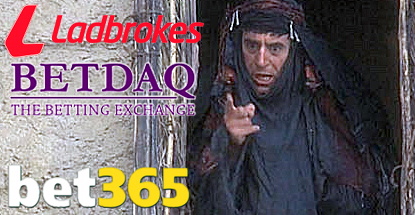 The UK’s Advertising Standards Authority (ASA) has spanked betting operator Ladbrokes over a World Cup promo by its Betdaq exchange betting subsidiary. The ad in question was a 2014 FIFA World Cup online promo that featured Rio de Janeiro’s iconic Christ The Redeemer statue wearing a Betdaq-branded purple robe. A complainant contacted the ASA, upset over the linking of Jesus Christ with gambling, despite the fact that His name is verbalized by both winning and losing punters with astonishing regularity.

In its defense, Ladbrokes said it hadn’t meant to cause offence and had removed the offending image from the Betdaq site. Regardless, the ASA ruled that the ad was “likely to cause serious offence to some visitors to the website” and ordered Ladbrokes/Betdaq not to run the promo again. Earlier this month, the ASA spanked Sporting Index for its own Christ the Redeemer-themed World Cup advert, one of many such variations ad agencies had cooked up for the quadrennial tournament.

Prior to the tournament, Ladbrokes had run its own World Cup online video promo that featured the same statue with its Ladbrokes-red robe pulled up over its head, as if Christ was celebrating having scored a goal. Despite the jubilant faces on the actors playing Rio citizens, Ladbrokes pulled the McCann Copenhagen-designed ‘Iconic Celebration’ video shortly after its launch following the threat of legal action from the Archbishop of Rio de Janeiro, who warned Lads CEO Richard Glynn that he wasn’t the messiah, he was a very naughty boy.

BET365 SCOREBOARD PROMOS IRK AFL BOSS
On the other side of the world, gambling promos will be banished from the Melbourne Cricket Ground (MCG) scoreboard starting next year. The Age reported that Australian Football League (AFL) chairman Mike Fitzpatrick was personally incensed by recurring scoreboard promos for the Aussie division of UK betting operator Bet365. Fitzpatrick, who led the charge to remove live odds promotion from AFL scoreboards a couple years ago, urged MCG chief Stephen Gough to get rid of the ads.

Problem is, the MCG has leased the scoreboard to Stadia Media, which has the deal with Bet365, which doesn’t expire until 2015. Nonetheless, Gough is adamant that the online gambling ads that currently accompany match highlight replays on the stadium’s big screen “won’t be there next year.”

The AFL is currently mulling how to proceed when its four-year exclusive betting partnership with Tabcorp expires at the end of October. Both William Hill Australia and Matt Tripp’s BetEasy (formerly Betezy) are reportedly chomping at the bit to steal the deal from Tabcorp, but the AFL has played coy on how it intends to proceed. Given the prevailing sentiment, the winning bidder will probably be the one to devise a betting ad that doesn’t actually contain any reference to betting.