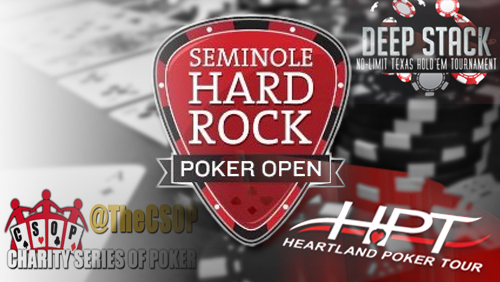 Live poker tournament wins for Danny “Miami Boss’ Suied at the Seminole Hard Rock Poker Open; likewise for Aaron Massey at the Heartland Poker Tour Ameristar, and great news for Matt Stout and the team at the Charity Series of Poker.

Whilst all eyes are currently focused on the record breaking European Poker Tour (EPT) in Barcelona, the Americans are also hosting a few events that need to be touched upon.

First we head to the Seminole Hard Rock Poker Open (SHRPO), and the side events that will culminate in the $10m Guaranteed Main Event due to be held Aug 28th.

The winner, Daniel ‘Miami Boss’ Suied, pocketed $110,349 after the final four players agreed to a chop meaning there was no four-way, three-way or heads-up action to write about.

“It’s good to pop one,” Suied told the SHRPO blog after his win, “I had a couple of final tables but it’s nice to get a six-digit score.”

The victory was Suied’s biggest of his career and now takes his live tournament earnings close to $340,000. Suied was a member of the World Poker Tour (WPT) Season XII Ones to Watch.

Aaron Massey takes his all time live tournament earnings over the $2m mark after victory at the most recent Heartland Poker Tour (HPT) Main Event in Chicago.

“I don’t have any words to say how I feel right now. I really wanted to win. I just kept firing away until I finally won the title.” Said Massey after his win.

Also making the final table was Mike Mustafa who you may remember finished second in a $500 NLHE event in the Chicago Poker Classic earlier this year.

Massey, who entered the final table as the chip leader, defeated Stan Jablonski in heads-up action after 50 hands were played out. The final hand saw the pair getting it in on [Kc] [Jd] [Th] with Massey holding two pair and Jablonski holding an open-ender.

The SHRPO has just added a new event onto the schedule courtesy of the Charity Series of Poker (CSOP), a non-profit organization created by the professional poker player Matt Stout.

To spice things up a little the hosts are adding an extra $15,000 into the prize pool as well as guaranteeing the winner a $5,300 entry into the $10 Million Guaranteed Seminole Hard Rock Poker Open Main Event.

“The CSOP is excited to be joining forces with Seminole Hard Rock Poker in one of the best tournament venues in the world,” stated Matt Stout.  “Players in the $10M Guaranteed SHRPO Championship will also have the opportunity to give back to the community and the world by helping us provide affordable housing for those deserving and in need.”

CSOP returns to the Borgata to raise funds for Support the Kid
Lee Davy
24 January 2017
.