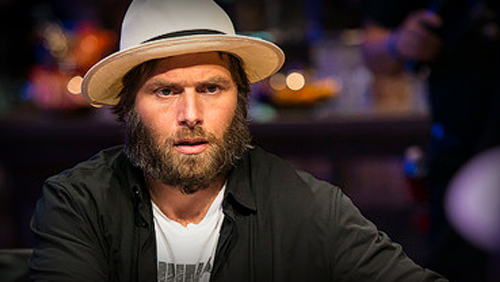 So who is going to win the ONE-DROP?

For the past couple of months, the poker community have been hedging their bets on which superstar of poker is going to take the biggest prize in the game. And as the final table rolls into town, it’s a non-professional leading the way.

Rick Salomon, who has been married to Shannon Doherty, Elizabeth Daily, Pamela Anderson—on separate occasions (shit happens right?)—and took the best supporting actor role in the infamous Paris Hilton sex tape, has shunted some of the best poker players in the world to the sidelines on his way to the chip lead with nine remaining.

Sam Trickett and Antonio Esfandiari were the last men standing when this tournament was last held two years ago and for a while, both looked a good bet to repeat that feat.

Trickett dominated the first day of action but his tournament would end at the hands of Daniel Negreanu after the man who finished second, two years ago, moved all-in on the river holding pocket aces, and the Canadian had rivered trip nines.

Esfandiari took the chip lead for a good portion of the second day of action, and for a while there were murmurs of the impossible. Could the Magician pull another $15 million rabbit out the hat? Unfortunately, the answer to that question was the negative as Esfandiari bowed out in 10th4 place after running A5 into the AJ of the German Tobias Reinkemeier.

A new champion will be crowned by the end of the day and you really have to fancy Daniel Negreanu at this stage of the contest.

The WSOP officials can rest a little bit easier now the Monster Stack has reached its climax and it’s Hugo Pingray who has become the third millionaire of the 45th Annual World Series after capturing the $1,327,083 first prize.

The Frenchman defeated the highly fancied Joseph McKeehen, in heads-up action, to take the first of what will be many Monster Stacks of the future, after 7,862 players voted with their money to show the WSOP that they want more bang for their buck.

Pingray came into the final table with the chip lead, but it was a tough route to riches with the likes of Thayer Rasmussen, McKeehen and the former WSOP bracelet holder Sean Drake all taking their seat in the biggest contest of their lives.

Pingray fought back from a 2:1 chip disadvantage to take the title and seven figure score.

When Asi Moshe cashes in a live tournament, he really does cash. Until the start of Event #55, Moshe had cashed just once in his career—a fifth place finish in a $1.5K event in 2013, earning him a nice six figure score.

Now he has two.

Moshe has taken the top prize in Event #55, beating 2,396 players on his way to a $582,321 first prize. Moshe waded through a final table that included the former November Niner Marc-Etienne McLaughlin, and the talented Timothy West to land his crown.

Event #56: $1,000 NLHE has reached the final day of action and 16 players remain from a field of 2,525. Leading the way is Raymond Henson with 897,000 chips: Steve Gross, Matt Salsberg and Justin Schwartz have chips in that one.

Event #58: $1,500 Mixed-Max NLHE attracted 1,475 players and at the time of writing there are around 156 players remaining. The chip leader is Shashank Jain with 130,300, but Brandon Cantu is just on his shoulder with 122,300 chips. Jared Jaffee and Tom Middleton are also at the top of the chip counts.

Event #59: $3,000 Omaha Hi-Low has reached the end of the first day of action and 457 players entered that one with around 180 left in the field at the time of writing. The chip leader is Marvin Rosen with 75,300 chips but there are a host of stars at the top end of the counts with Brian Rast, George Danzer, David Williams, Naoya Kihara and Vanessa Selbst all looking good.