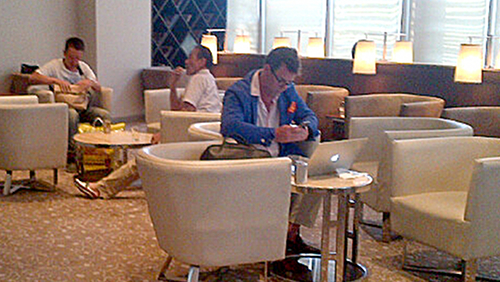 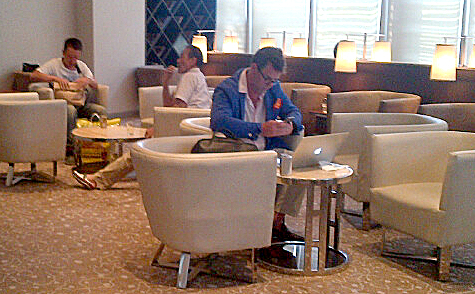 Accused con man Jan Robert Gustafsson has fled the Philippines after reportedly being fired from his position with online payment processor Transact24 Philippines aka T24PH. (For the record, this firm has no official connection to the Hong Kong-based Transact24 firm, on whose good name the Philippines-based company is attempting to piggyback.)

On Wednesday afternoon, Gustafsson (pictured, in blue) was spotted boarding Air Philippines flight 306 from Manila to Hong Kong, although his followup destination couldn’t be immediately confirmed. Days earlier, Gustafsson had been advertising the fire sale of one of his luxury cars via social media, apparently in a bid to raise some quick cash to help fund his flight from justice.

For those in the dark, Gustafsson was the former head of Bodog Asia who attempted to embezzle millions of dollars from his former employer after being unceremoniously fired for gross incompetence. Gustafsson and a small army of turncoat lieutenants reportedly bribed a local judge into signing a warrant authorizing a raid on Bodog Asia’s offices last November that failed to turn up any evidence to support Gustafsson’s allegations. Gustafsson was subsequently indicted for fraud and the gang that couldn’t shoot straight has been unsuccessfully attempting to cover their tracks ever since.

Until recently, Gustafsson had been helping to try and get T24PH off the ground with Karl Rosengren, who co-founded the original Transact24 but was forced out by co-founder Philip Meyer. T24PH had been enjoying the generous financial support of a local political heavyweight and a man with a reputation for not taking kindly to scammers. The ex-politician had his daughter monitoring the day-to-day activities of T24PH and apparently, at least as it relates to Gustafsson, daddy’s girl didn’t like what she saw. CalvinAyre.com will have more details on this development in coming days.

Gustafsson’s skedaddle will put further pressure on his partners in crime – Rosengren, Patrik Selin, Sylvia ‘Scissorhands’ de Guzman and others – to make their own dash for safety, likely to countries with which they already hold valid passports. But escaping the Philippines doesn’t mean escaping their legal liabilities. The raids on Bodog Asia’s offices were only possible because the gang members reportedly bribed a local judge and police, and most countries have strict laws on their books against bribery of foreign officials. Watch this space…