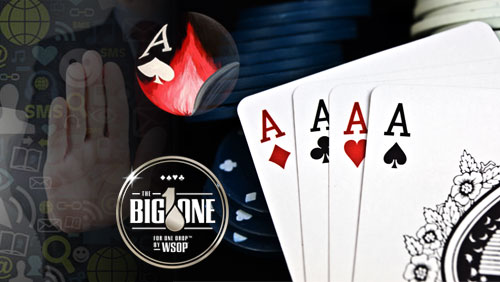 Lee Davy gets on the right side of those who hate to read, by condensing the weekly global poker picture into 900 words.

This week saw the game of poker spread to the global masses with the speed of an Ebola outbreak in West Africa. All hail the BIG ONE for ONE DROP for the explosion of interest.

The infamous Cary Katz/Connor Drinnan aces hand pulled in over 6.6m YouTube hits, after ESPN aired the stomach churning clip, and the eventual winner Dan Colman became a global mega star after his miserable pout hit the headlines on virtually every major sports and entertainment stand in the world.

Quite ironic when you consider young Colman decided not to talk to the media, or pose for snapshots, because he didn’t want to promote the game.

So Colman does more for the popularization of poker than a Phil Hellmuth Carls Jr ad, and another man who has a vision of taking poker into the front rooms of households all over the world is Alexandre Dreyfus.

The CEO of the Global Poker Index (GPI) continued his partnership expansion by cutting a deal with the World Poker Tour (WPT) that sees them now using the GPI formula to power their Player of the Year (POY) Leaderboard. Two down and one to go, with the EPT and WPT in the bag, will the World Series of Poker (WSOP) be next to follow suit signifying the death of the BLUFF formula?

Another connection to the WPT and WSOP is Tristan Wade. The WPT Deepstacks Director of Poker Operations took down the first WSOPC Main Event of the new season when he captured the first prize of $106,806 at the Palm Beach Kennel Club. Other big winners of live tournaments last week include Martin Kozlov, who took $171,080, after winning the Sydney Championships Main Event, and China’s Zhenru Xie who took down the Macau Poker Cup Red Dragon for just over $200,000.

Another man who likes to splash around in Macau is Phil Ivey. The Tiger Woods of Baccarat hit the news this week when it was revealed that his legal dispute with the Borgata Hotel Casino & Spa, over his edge sorting antics, is going to take at least another year to be resolved.

If it all goes tits up for the Golden Balls of poker, then you just hope he still has a significant portion of the $19,242,743 that he has won playing online cash games at Full Tilt Poker (FTP). That remains a record, but one man who is fast catching him up is Daniel Cates.

Last week saw The Jungleman top the $10m mark in FTP winnings for the first time in his young career. Imagine how much more money Cates could win if he wasn’t wasting his time flying to the wrong parts of the world? Cates somehow managing to get San Jose del Cabo in Mexico mixed up with San Jose in California.

One man who needed to make sure his compass was working correctly last week was Shannon Shorr. The American poker ace spent six days trekking to the summit of Mount Kilimanjaro, a hike that gave him the greatest high of his life, and made smoking weed and consuming MDMA feel like getting tiddly on Champagne bubbles.

Shorr is an American, which means he can buy a Uzi Nine Millimeter and Bowie knife, but can’t play online poker because it’s deemed to be too more dangerous than being a Malaysian airline pilot.

This means the likes of Shorr have to travel far and wide to get into the best online poker action in the world, and last week PokerStars took steps to make sure that anyone choosing to stay in the land of Stars and Stripes, and play via a VPN, would be heavily punished.

The fine for breaking this rule used to be the loss of your winnings, but the owners of the Red Spade have since changed this ruling to one where they will confiscate the player’s entire balance.

PokerStars take their security very seriously, and this last week they released a virtual tour of their headquarters, in the Isle of Man, that included a department-by-department lowdown on what actions they are taking to make sure that player’s funds are safe.

PokerStars player funds may be safe, but their sponsored pros are not. Last week saw three members of the Latin American crew sent to the job center after budgetary constraints ensured the contracts of Humberto Brenes, Jose ‘Nacho’ Barbero and Angel Guillen were torn to shreds.

Poker sites love to follow by the ‘me too’ philosophy and no sooner had the South American continent carved some dead wood from its poker tree, than the North American one followed suit. Ultimate Poker deciding that William Reynolds, Jeremy Ausmus, Phil Collins, Lauren Kling and Brent Hanks had taken Team U about as far as they could take them.

There are rumors that the PokerStars Team Pro savagery was needed to pay for the golden tennis rackets belonging to Rafael Nadal, but perhaps they are preparing for their entry into the US iGaming space, with Team Pro America patches already getting a hammering underneath the sewing machine.

An unofficial rumbling surfaced that October 1st would be the date that PokerStars and FTP would launch their respective online poker rooms in New Jersey, but it was never backed up with any official word by members of the Stars media team.