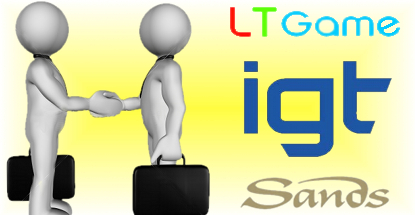 IGT will serve as exclusive distributor for LT Game products in the US and Canada, while IGT will also enjoy first right of refusal for distribution of LT Game products in Mexico, Central and South America, the Caribbean and Europe. IGT global sales VP Eric Tom called the alliance “unique to the gaming industry” in its combination of the two firms’ expertise in their respective home markets.

Paradise chairman Jay Chun said the deal “unlocks enormous potential for LT Game in the international market.” Chun has suggested as much as 60% of LT Game’s revenue could come from international markets in 2015. Paradise recently announced that LT Game had received approval from Nevada gaming regulators to install its gear in Nevada casinos.

Chun also said LT Game was “well-positioned to assist IGT in their penetration in the domestic Macau market.” IGT has struggled to expand its Asian footprint, totaling just 3,900 unit sales in the region between 2009 and 2012, and many of those were replacement units. Macau casinos are expected to require an additional 9k slots over the next three years. Chun said the fact that IGT’s end of the deal was focused on slots in Macau meant it wouldn’t be affected by LT Game’s ongoing ETG patent litigation with SHFL Entertainment.

Interestingly, casino operator Las Vegas Sands reportedly served as matchmaker for IGT and LT Game. Chun told GGRAsia that Sands execs brought the two firms together at this February’s ICE confab in London. Chun said “very senior management” convinced the pair that their relative strengths in slots and ETG were complementary and suggested “some strategy to work together.”

Sands has been among the most enthusiastic adopters of LT Game’s electronic baccarat technology, in part as a way of skirting Macau’s infamous gaming table cap. The live- and hybrid-ETG can simultaneously serve dozens of customers while counting as a single table under the cap, which frees up actual tables for VIP and even more profitable premium mass gamblers. Sands’ Palazzo property in Las Vegas also served as the host venue for LT Game’s ETG field trial.