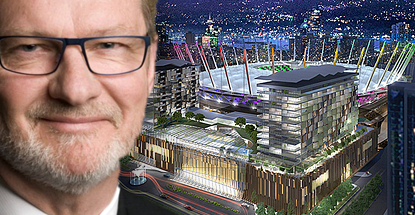 Former British Columbia Lottery Corporation (BCLC) president Michael Graydon (pictured) has missed the deadline for paying back a disputed portion of his infamous golden handshake. Graydon abruptly resigned his BCLC post in January only to announce one week later that he’d taken a position with PV Hospitality, a subsidiary of Paragon Gaming that is looking to build a new casino in downtown Vancouver.

Despite resigning his post, Graydon left the public sector with a ‘severance’ package worth some $114k. But as public anger grew over revelations that Graydon had been negotiating the terms of his new private sector deal months before his BCLC exit, the province determined Graydon’s behavior had run roughshod over the province’s ethical guidelines and instructed Graydon to repay $55k of the windfall by July 22.

That Tuesday deadline came and went without a check bearing Graydon’s signature showing up at BCLC’s headquarters. A spokesperson told the Vancouver Sun that while BCLC had not had “a formal response” from Graydon, “preliminary discussions” were underway with his lawyers. The delay is surprising, given that BCLC is supposed to have a certain amount of leverage in this discussion, as Graydon’s antics have left him subject to a review by the BC Gaming Policy and Enforcement Branch to determine his suitability to serve as a registered gaming official.

VANCOUVER CITY COUNCIL TIES PARAGON’S HANDS ON CASINO OPTIONS
Vancouver city council apparently wasn’t waiting for the province to get tough with Graydon, particularly since it was the province who approved Graydon’s golden handshake in the first place. On Tuesday, council expressed its displeasure by approving new restrictions on the casino Paragon plans to construct. In 2011, Paragon had proposed moving its Edgewater Casino operations to a new parcel of land beside BC Place stadium, but city council rejected the plan based on Paragon’s desire to double the number of gaming tables and triple the number of slots.

Paragon duly submitted a new proposal that kept the number of gaming options constant at 75 tables and 600 slots but didn’t reduce the casino floor’s square footage, leading many to conclude this was a Trojan horse that would allow Paragon to finagle the extra gaming options at a future date by getting the provincial government to intervene on its behalf.

But on Tuesday, city council imposed a new covenant on the property’s title that would “prohibit any future increase in any form of gambling entertainment including the number of slot machines and gaming tables.” City planner Brian Jackson told Metro News that the covenant was redundant but represented a “third level of security” to preclude Paragon from doing an end-around council’s wishes.

Councillor Adrienne Carr told CKNW the “very binding” covenant would ensure that Edgewater’s current complement of gaming options would remain carved in stone. She called the covenant “the strongest layer of protection in the event the province does decide or could decide to do something different and take away some of the city’s authority.”