Home / Press Releases / Akamon, number 14 in the world among Top 25 Social Casino companies according to EGR 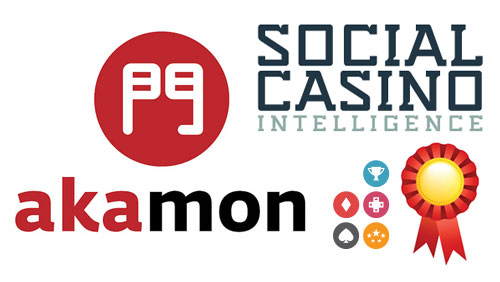 Social Casino Intelligence list places the Spanish company for the third consecutive year among top 25 social gaming companies with number 14 this year, a better position from the 15 obtained in 2013.

Barcelona, 23 july 2014. Akamon Entertainment, the social casino gaming company operating in South Europe and LatAm, has been ranked for third consecutive year at Top 25 social gaming companies of the market list, according to the leading industry magazine Social Casino Intelligence.

Akamon, gaining a position and listed number 14, is the only Spanish company and one of few European companies mentioned in the ranking, led by the Canadian Caesars Interactive and the North American IGT Interactive and Zynga.

The report accompanying the annual list highlights the agitate moment of the Social Casino industry, disturbed during the last 12 months by numerous acquisition or merger operations between companies of this dynamic sector. This period of transition has allowed the entrance for first time in the list of land-based companies, being Akamon one of the few companies which continues operating independently.

Vicenç Martí, Akamon CEO says that ” Akamon leadership in social casino in Southern Europe and LatAm  has allowed to be listed with number 14 at SCI´Power 25. At Akamon we are extremely proud to be for the third straight year as one of the Top 25 companies in the Social Casino Industry and this is a nice recognition to the teams in our studios in Barcelona, Valencia and Tel Aviv. “

Akamon Entertainment is an online social gaming company specializing in traditional and casino games, operating in Southern Europe and Latin America via local portals, those of partners that are leaders in the online field, Facebook, and mobile devices. The company, which has its own development team and offices in Barcelona, Valencia and Tel Aviv has been internationally recognized as one of the 7 fastest growing Tech companies in Europe by The Next Web at Tech5 ranking 2014 and has been also identified by the gaming industry as one of the best emerging gaming companies with the prize “Who’s Got Game” in Games Beat 2012 and the “Rising Star” prize at EGR operators awards in November 2012 where it was also awarded “Social Bingo Product of the Year”.

Akamon’s extensive portfolio consists of 40 casino and local traditional games, such as Tute, Tarot, Roulette, Buraco, Parcheesi, Bingo, Poker and Dominoes. All the games incorporate social features and give players the opportunity to be a part of a global gaming community of more than 22 million registered users, whereby they are online together and share their gaming experience, whether it be via Akamon’s international portals, those of its partners, Facebook or mobile devices.