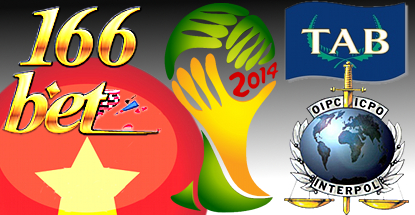 Police in Vietnam have revealed they broke up a major online sports betting operation shortly after the 2014 FIFA World Cup final match was played on Sunday. Moments after Germany hoisted the trophy, Ho Chi Minh City police raided eleven locations across the city at which gamblers were settling up with bookies, arresting six individuals and seizing numerous computers, phones and other digital tools of the trade.

Thanh Nien News reported that the betting ring handled “hundreds of millions of dollars” in wagers, including US $9.4m just on Germany’s final match. The wagers were processed via the Philippines-based 166bet.net, which also offered live dealer casino games, but currently displays the following message: “Access to the site is not available due to scheduled maintenance.” The bust was the third major online betting operation taken down by Vietnamese authorities during this year’s World Cup.

On Friday, Hong Kong police recapped their own World Cup anti-betting activities, citing the arrests of 176 individuals, the seizure of HKD 13m (US $1.7m) in cash and betting slips totaling HKD 750m ($96.8m), more than twice the sum reported following the 2010 tournament. Police said 39 of those arrested were believed to have triad links, but cautioned that no one triad appeared to have a lock on illegal betting activity.

Hong Kong was one of nine Asian jurisdictions that had banded together with the help of global crime fighters Interpol to coordinate actions and share information regarding illegal World Cup betting. On Friday, Interpol reported these combined efforts had resulted in the arrest of over 1,400 individuals and the seizure of $12m in cash. Interpol executive director of police services Jean-Michel Louboutin said the betting rings disrupted by these efforts handled over $2.2b in World Cup wagers.

Interpol aren’t the only ones puffing out their chests at their World Cup windfall. The New Zealand TAB has reported generating NZD 32.2m ($28m) in World Cup wagers, higher than the NZD 30.2m generated by the 2011 Rugby World Cup, which previously held the TAB’s record for biggest ever betting event. The windfall helped the TAB top NZD 2b in annual turnover for the first time in its history.