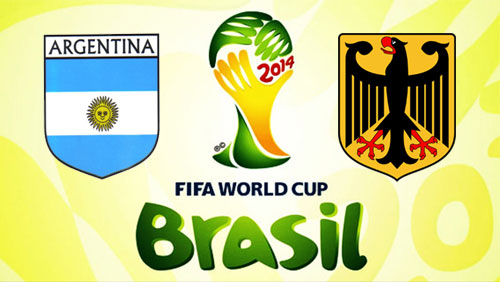 Argentina booked a World Cup finals date with Germany with a dramatic penalty shoot-out win over the Netherlands in their semi-finals clash. Okay, dramatic may be too generous a word to describe the sluggish and, mostly, unwatchable 120 minutes of action but if you’re Argentina, this isn’t the place and time to lament on how you win. As long as you do, in whatever shape or fashion, then who cares how you did it.

So now we have our World Cup finals. The rampaging Germans take on the steely Argentines for the third time in the World Cup finals—two titans of the football world to decide the pecking order of the sport for the next four years.

Germany is listed as favorites in the showdown at Maracana, getting 3/2 odds compared to Argentina’s 21/10 odds. A draw has been slotted at an attractive 2/1 odds.

It’s interesting to see a European squad playing in the finals of a World Cup staged in South America and being listed as the favorite. At the very least, the Germans are out to debunk the myth that no European squad could ever adapt to the ruthless climate of Brazil and bring home a World Cup title.

But after the beat down, they inflicted on Brazil in their semi-finals match; you can excuse oddsmakers for being prisoners of the moment and listing Germany as the favorites. Then again, given the quality the team displayed in its dismantling of the Brazilians, 3/2 odds might offer be too much value and could even drop in the days leading up the game.

Believing in that, though, could come at a price.

Argentina looked stagnant against the Netherlands and that included Lionel Messi, probably best football player in the world. But don’t mistake tactics for general inefficiency.

What you saw in that game was a concerted effort to make less mistakes than their opponent and pounce when they do.  The Argentines didn’t get enough of those chances because the Dutch were as stubborn in that same game plan. Football is a cruel sport, especially for those who lose in as brutal a fashion as penalty kicks.

It’s been a delirious few weeks for football fans but here we are—down to two teams that will make a their case for being the best in the world.

It’s Germany versus Argentina in the World Cup Finals.