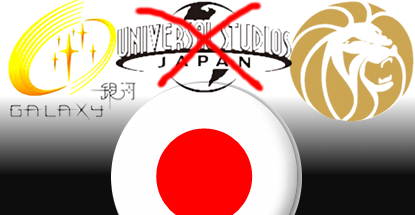 Officials in Osaka have made it clear that local interests will play a decisive role in determining who wins the few coveted casinos licenses in Japan. Late last week, the operator of Universal Studios Japan (USJ) in Osaka told Kyodo News that the company would pursue a casino and theme park project on Yumeshima, the man-made island in Osaka Bay. USJ officials said they hoped to partner with international casino firms on a joint project.

Within days, Osaka Gov. Ichiro Matsui and Mayor Toru Hashimoto had dismissed the idea of USJ receiving a casino license; at least, not on their watch. Matsui noted that USJ had “no experience at all in the casino sector” while Hashimoto said he didn’t have “a relationship based on trust with USJ’s management.” USJ may have sown the seeds of its own demise via its four-year-long battle with the city over the amount of money USJ pays to lease the land on which its existing theme park resides. Officials suggested the real frontrunners for the Osaka casino license were MGM Resorts and Galaxy Entertainment Group.

Across the Sea of Japan in South Korea, the Lippo-Caesars Korea joint venture of US casino operator Caesars Entertainment and Indonesian conglomerate Lippo Group has handed over a $10m deposit on the land for their $2.2b resort casino project on Yeongjong island near the Incheon Free Economic Zone. The remaining balance on the land price is to be paid by the end of the year.

The JV partners plan to break ground on their project some time in the first half of 2015. Genting Singapore, which is building its own South Korean integrated resort on Jeju Island, delayed its groundbreaking last month, reportedly over concerns Jeju’s newly elected governor had expressed as to the scope of the project. Lippo-Caesars hope to open their project’s $736m first phase by April 2018, with second and third stages completed by 2023.