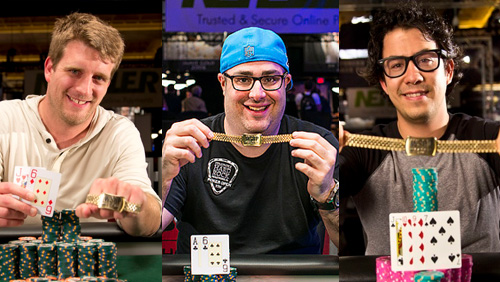 Mike Kachan achieved victory in Event #56: $1,000 No-Limit Hold’em (NLHE) in what was only his third live tournament cash in the previous eight years (all at the WSOP).

He picked up $403,483 after defeating Jeff Blenkarn in heads-up action on a final table with very few notable players making the cut. Of those notables the former WSOP bracelet winner, Steve Gross, finished seventh, and the former WSOPC winner, Ray Henson, finished ninth.

What a few years it has been for Jared Jaffee.

The New Yorker has added a WSOP bracelet to the World Poker Tour (WPT) title he secured late last year after defeating a field of 1,475 runners, to capture the top prize of $405,428.

Shashank Jain took the chip lead after the nine-handed action, before bowing out in 21st place, and thereafter Jaffee took over proceedings. The critical juncture in the tournament coming when Jaffee got it in with Brandon Cantu for a 3.1m chip pot: KK vv QQ. An AAQ flop gave Cantu the lead, but a King on the river reversed the fortunes and placed Jaffee in a tremendous position.

Jaffee would go on to defeat Joseph Alban, and Mike Watson, in the heads-up action to take his first gold bracelet, and now puts him in the Triple Crown hunting category with just a European Poker Tour (EPT) victory preventing him from joining that small band of warriors.

Philip Hui, the boyfriend of the WSOP bracelet holder Loni Harwood, has added some more gold to their trophy cabinet after achieving victory in a very tough final table.

It was Hui’s second WSOP final table of his career, and his first victory. He picked up $286,976 after navigating his way through a great final table that included the in form Ismael Bojang, Matt Glantz and Jordan Morgan.

Event #61: $10,000 Seven-Card Stud Championship attracted 102 players and Phil Hellmuth is looking to put some more light between him and Phil Ivey, in the WSOP bracelet wars, as he comes into the final day of action 3/9. The chip leader is Todd Brunson with 980,000; Steve Landfish is second with 550,000 and Hellmuth sits perched in third with 404,000.

Charity was the order of the day as Day 1A of the LITTLE ONE for ONE DROP kicked off in earnest. 1,942 entrants graced the felt on Day 1A and Jason Wheeler looks to have bagged up the most chips with a stack of 71,500. Day 1B starts at noon, Thursday 3rd July.

Event #63: $1,500 Six-Handed 10-Game Mix attracted 445 players, once again showing the popularity of the mixed game genre. The day ended with just 85 in with a shot of a bracelet and Bryn Kenney has the chip lead with 67,000 chips. Scott Clements, James Carroll and Justin Bonomo close out the top four.