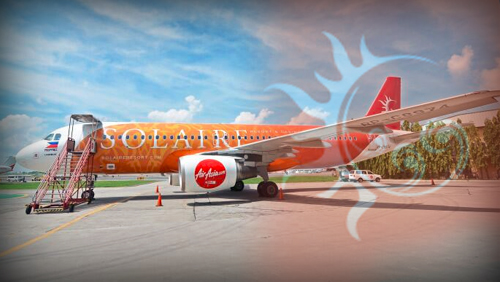 Bloomberry Resorts’ Solaire Resort and Casino has teamed up with Air Asia in a branding project of mile high proportions that will see the airline company’s new Airbus 320 wrapped up in a Solaire livery.

It’s not your typical billboard or bus livery campaign but since opening last year, Solaire hasn’t operated under traditional marketing schemes, opting to promote itself in ways that attract attention and dialogue. In a lot of ways, this new collaboration with Air Asia fits into that mold and in so doing, raises the profile of the resort and casino in a number of the airlines’ destinations, including Malaysia, China and Korea.

For now, only one of Air Asia’s planes—the aforementioned airbus 320—will receive the Solaire livery. But the partnership will continue until 2016, leaving the possibility open for more collaborations of this ilk to happen between now and then.

On a more important note, consider this move as the latest attempt by Solaire in establishing itself as one of the fastest rising resort and casino operations in Asia. That’s always been the company’s goal because it doesn’t carry nearly the same amount of brand name cachet as some of its rivals in the Philippines, much less around the region.

But with its eye-catching livery plastered all over one of Asia’s premier budget airlines, Solaire is hammering home the point that it’s a casino with a sky-high potential to be one of the region’s best.