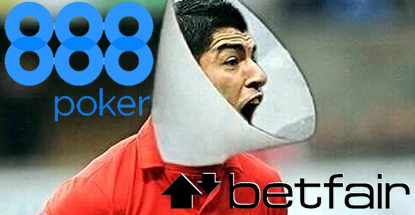 The bite seen round the world has come back to bite Luis Suarez in the wallet. Following Suarez sinking his mighty incisors into the shoulder of Italian player Giorgio Chiellini during Uruguay’s match against Italy earlier this week, UK-listed online gambling operator 888 Holdings has “decided to terminate its relationship” with the mercurial striker “with immediate effect.” 888poker had signed Suarez last month “following a fantastic season for which his achievements were widely recognized,” but apparently Suarez’s contract had a ‘no dick moves’ clause that 888 chose to exercise.

Suarez has already been hit with a four-month ban from football by FIFA, eliminating him from appearing in any of Uruguay’s remaining matches at the 2014 FIFA World Cup. And the hits may not be over. Athletic wear company Adidas has already purged the airwaves of any Suarez-related marketing and is currently reviewing whether it wishes to continue being associated with Chompy McBiterson.

Not everyone found Suarez’s antics unbecoming. Colombia, for instance, will be relieved at not having to face Suarez on the pitch when they play Uruguay on Saturday in the World Cup knockout stage. And there’s a couple hundred football bettors who opted to take a chance on Suarez-bite prop wagers, including a Norwegian who won $3,300 after placing a few bucks at 175-1 odds with Swedish operator Betsson that Suarez would put his prodigious overbite to good use.

Finally, online betting exchange Betfair has taken a page out of Paddy Power’s book by temporarily rebranding itself as ‘Bitefair.’ The company said the cheeky alias was intended to show support for FIFA’s decision to crack the whip rather than appear to be letting a star player break the rules in order to maintain TV ratings. The company says the name change, which covers its site, social media handles and print advertising, will persist until June 30.