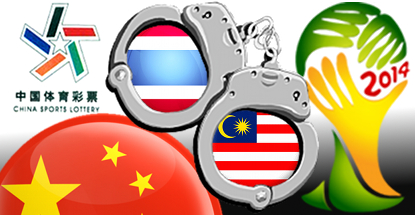 Malaysian authorities have broken up an illegal sports betting ring believed to have handled wagers totaling Rm 105m (US $32.6m) since the 2014 FIFA World Cup kicked off two weeks ago. On Tuesday, police in Kuala Lumpur raided an office park after four weeks of surveillance, arresting four suspects and seizing computers and betting records. This particular ring served a reported 1,500 clients, with individual betting limits capped at Rm 5k ($1,500) per day.

Police believed the arrested individuals were “gambling syndicate agents,” a welcome change from the small-time runners police have been locking up since their Ops Saga V crackdown began on June 12. Police also confiscated a dozen computer servers suspected of supporting an international online betting site. Deputy CID director Datuk Mazlan Mansor noted that it was the first time the police had seized servers and they were “still investigating the website used for gambling.”

In Thailand, the number of World Cup betting arrests hit 1,023 as of Wednesday. On Tuesday, authorities nabbed their first foreigners – one from Macau, two from Hong Kong – believed to be bookmakers operating out of a Bangkok sauna. According to Deputy Commissioner General Pol Gen Ake Angsananont, the bookies were found with betting records totaling some Thb 20m ($615k).

In a statement to China Daily, Tencent said it had blocked Alipay because users were complaining that it took too long for the money to arrive in their QQ Lottery accounts. While not directly accusing Alipay of dragging its feet to hobble a rival, Tencent helpfully suggested QQ bettors use Tencent’s own Tenpay service to fund their accounts. Tencent claimed it was “in talks” with Alipay to resolve the issue, which will likely happen about one minute after the ref blows the whistle on the World Cup final on July 13. China’s sports lottery operators get to keep 13% of all wagers, with 22% going toward charitable causes and the remaining 65% paid out in winnings.