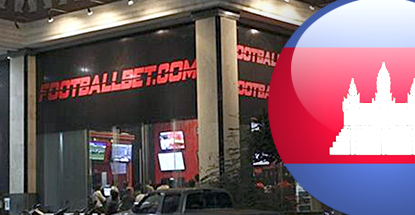 Cambodia is considering regulating its online sports betting market as it crafts overdue updates to the country’s gaming laws. The Ministry of Economy and Finance’s gaming department is currently drafting a new Casino Law, which could be finalized by the end of the year. Ministry spokesman Ros Phirun told the Phnom Penh Post that while Cambodia wasn’t yet ready to issue licenses for online betting, ‘it is in the process of being studied.”

Sports betting is largely illegal in Cambodia although occasionally tolerated inside certain casinos. In March, former Unibet subsidiary Kambi Sports Solutions inked a deal to provide a land-based sportsbook for Phnom Penh casino NagaWorld, the flagship property of operator NagaCorp. Despite the prohibition, online betting services are widely available at the small-scale casinos clustered in special economic zones like Poipet on the border with Thailand. An unidentified online betting operator in Poipet told the Post that licenses “will have a ripple effect throughout the entire casino industry here,” with an enhanced offering generating increased revenue.

But the issue will likely have to wait, as Phirun said the government’s priority in updating its gaming laws was simple: “to attract bigger casino operators.” Despite having one of the region’s more expansive gambling markets, Cambodia had had difficulty attracting international casino companies currently operating in Macau and the United States. This is in part due to a complex tax formula that factors in location as well as numbers of tables, slots and customers.

Large international operators have shown no interest in setting up shop on the wild and woolly borders of Thailand and Vietnam. Yariv Lerner, general manager of Queenco Leisure International, which operates a number of gaming joints in Cambodia, says the majority of the country’s small-scale casinos are struggling to stay in the black. Border casinos “have a net gaming model focused on low-level players. And that is not the future.”

That leaves only Phnom Penh as a likely building spot, but NagaWorld’s exclusive right to casino gambling within 320km of the capital doesn’t expire for another two decades. Phirun declined comment on whether a premature end to NagaWorld’s monopoly was being considered or what concessions NagaCorp might seek in exchange for not raising too much of a fuss.