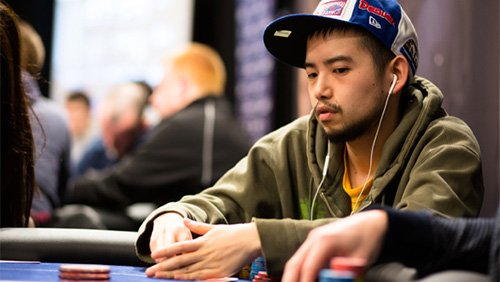 Lee Davy sits down with the British pro, Andrew Teng, to talk about his recent fourth place finish in the Millionaire Maker, his friendship with three-time World Series of Poker (WSOP) bracelet winner, Dominik Nitsche, and much more.

When the final table of the Millionaire Maker was set, anyone who knew anything about poker had Andrew Teng pegged down as one of the big favorites to walk away with the $1.3m first prize.

Unfortunately, for Teng, it wasn’t meant to be, but he still picked up one of the biggest prizes of the summer securing $465,972 for his fourth placed finish.

When I catch up with him he is still bearing the scars from that day. Happy scars. The type that sticks your face into a Joker like perma-grin.

“It was a fantastic result for me. A massive score, and I am just thrilled.”

I ask Teng if there was one particularly crucial hand that stands out for him?

“There was one hand, on Day 2. We were just in the money, and I had around 55k chips. I 3B squeezed KQ and both of them called. We somehow ended up on the river. There was, like 60k in the middle, and I decided to jam for 36k on JT727, and the guy folded Queen’s – face up – and that was a crucial point in my whole tournament.

“I don’t think any good player folds there. It was an absurd fold. I thought maybe I am bluffing off a ten, or maybe some jacks or something, and then he folds Queen’s. That’s the difference between me cashing for a minimum or…a lot more.”

Once Teng made the final table he was already in the land of huge scores. How did this affect his approach?

“I was still trying to win, but at the same time I was trying to play relatively ICM aware, and it seemed most nobody else was?  I don’t know what they were doing? They were all playing to win the million, when realistically, maybe coming second would have made more of a difference in their life than coming sixth.”

What was their issue?

“They were way too aggressive. We came into the final table. I was third in chips, with just over 4m, someone else had 4m and the chip leader had 11m; and in the third hand of play the chip leader gave away 4m.

“He played a hand, in such a way, I thought wow you have just flopped a set  – good play – this is amazing, you have absolutely got this old guy going; and he had nothing but ace high, and I immediately face palmed myself. He came sixth, I think, and if you come into a final table with 11m you don’t expect to finish sixth – top three at least.”

Teng’s amazing cash comes barely a month after he landed his second GUKPT title, with victory in his home town of Edinburgh, so what’s happening to his game?

“I have only played six tournaments, out here, and cashed one of them. I am happy overall, but immediately after busting I feel just as disappointed as if I didn’t cash for a big amount. It’s not like I have said to myself, ‘I have just cashed for fuck loads so let’s go for it,’ I think that’s the wrong attitude.

“I have definitely had a lot of luck. Maybe I’m playing a little better? I have been working a lot with Dominik {Nitsche}, and people will soon start to see that he is pretty exceptional. Some of the work he has been doing is way beyond anything else anyone has even conceived of doing.

“He will spend three days straight, just doing theory work. Then at the end of the day he will give me 30-60 mins lecture, and I’m like, ‘Yes Dom, I will try to do everything you tell me..’”

It’s incredible to think that he is so wise, and yet so young,

“That’s true on the poker table, but outside of poker he is like a 16-year old.”

So was the big win important for Teng? How was his bankroll before he came to Vegas?

“I have always been comfortable. I haven’t ever really needed to do very well – although I would like to. In the last year, and a half ,we have been super nitty. That’s why we are all in Edinburgh. It’s just to save a shitload of money. Rupert {Elder} was living in South Kent, I was living in Bayswater, and we were blasting fuck loads of money on rent, and we were like let’s do some math here boys, and we all decided to move to Edinburgh.”

Where they all dine out on Rupert Elder’s rice pudding and bubble tea.

“Well, we will be, if he ever get’s that up and running.”