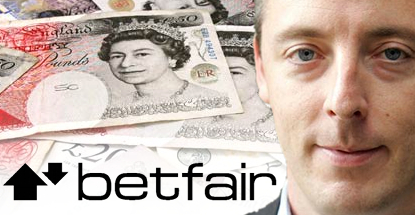 UK betting exchange Betfair returned to form in its fiscal 2014 results, reporting a record profit of £61.1m, a stark turnaround from the £49.4m loss Betfair reported in fiscal 2013. For the 12 months ending April 30, Betfair revenue rose a mere 2% to £393.6m but earnings rose 24% to £91.1m. The improved bottom line is the result of a £33m reduction in expenses following Betfair’s withdrawal from many of its ‘grey’ markets in order to focus on ‘sustainable’ aka regulated markets.

Betfair’s fixed-odds sportsbook revenue rose 50% to £36.2m but its core exchange betting product dipped 1% to £244.3m. Betfair has announced it intends to report a single wagering revenue vertical in future, casting doubts as to the long-term growth prospects of what had been Betfair’s unique selling point.

Mobile revenue rose 70% and accounted for 64% of all sportsbook revenue in Q4. Gaming revenue fell 13% to £86.2m, dragged down by poor poker performance. Betfair US reported revenue up 20% to £46.7m, but while its TVG horseracing operation profit rose, this was offset by startup costs from Betfair’s online gambling operations in New Jersey. Nonetheless, the US division added £2m to Betfair’s earnings.

Betfair CEO Breon Corcoran (pictured) said the company’s new Cash Out and Price Rush features had been major hits with customers, with Cash Out having been utilized over 30m times while over 500k bets have been ‘Rushed,’ boosting the value of these bets by 24% in the process.

Betfair is currently sitting on a cash reserve of £209.8m but Corcoran offered no guidance as to what the company plans to do with it. With the UK’s new 15% point of consumption tax scheduled to take effect on Dec. 1, Betfair may find it useful to have a cash cushion on which to land. Corcoran revealed that if the POCT had been in effect over the past year, the impact would have reduced Betfair’s bottom line by around £30m in FY 2014. Imminent tax changes in Ireland would have boosted that reduction to £36m.

Like all bookies, Corcoran said Betfair was expecting great things from the 2014 FIFA World Cup kickoff on Thursday. Despite his Irish heritage, Corcoran is rooting for England to get off to a good start. Betfair’s current focus on the UK market means it needs to keep UK punters excited, but if England “have a couple losses early on, I think people will lose interest quickly.”