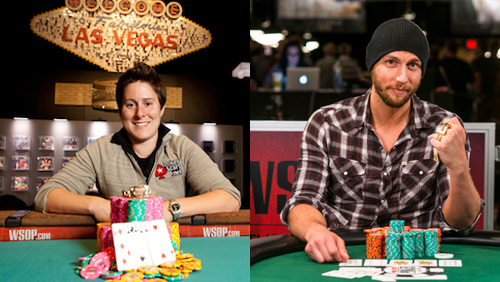 Vanessa Selbst proves once again that she is one of the very best components of this art, by winning her third WSOP bracelet, after overcoming a 5:1 chip deficit against Jason Mo.

Her come back was reminiscent of the amazing 7:1 claw back that she pulled off in her semi-final, against the inexperienced Al Decaloris, to book her berth in the final.

Her victory means Selbst now ties with Barbara Enright as the two females with the most WSOP bracelets; an honor that will almost certainly be solely Selbst’s if she continues to go about her business like she has in the past few years.

Two hands turned Selbst from a potential loser into a world-beater.

Then in hand #63 Selbst took control.

I was fully expecting to be waxing lyrical over the talents of Steve Billirakis today, but the two-time bracelet winner failed to turn his over night chip lead into a Vanessa Selbst style third bracelet, after finishing a disappointing fourth.

The winner was Brandon Shack-Harris, who recorded his fifth all-time WSOP cash, and his most significant to date, when he captured the $205,634 first prize.

Shack-Harris was a touch fortunate in the final hand of the contest, but hey man, this is poker.