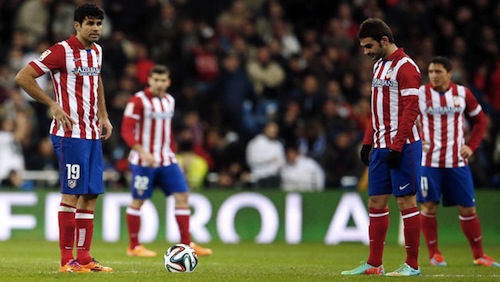 Three minutes. That was all that stood between Atletico Madrid’s dance with immortality. Play three minutes without conceding a goal and the Champions League title was there.

But alas, Atletico’s fairy tale ending went up flames so close to the end with reality biting hard in the form of – what else – a Sergio Ramos header. It’s a narrative best served as tragic, except that it won’t be fair to what Atletico has accomplished this year.

Say what you will about the glamour and elitist aura of the Spanish La Liga’s two colossus teams – Real Madrid and Barcelona – but neither of those teams won the league this year.

That title is in the hands of Atletico Madrid.

And for 90 glorious minutes (if you’re an Atleti fan, that is), the Champions League title was inching closer and closer to being their property. Even after Ramos’ dramatic equalizer, the red side of Madrid still had a chance in extra time. But then Gareth Bale happened and that broke the back of a tired and exhausted Atleti side that just couldn’t keep up anymore.

You’d be excused for being devastated yourself if you happened to have had money down on Atletico to win the title. After all, they were heavy underdogs against their cross-town rivals and resident big brothers. Atletico didn’t call themselves the Galacticos for their seemingly endless list of otherworldly players that have worn Real colors.

Entering the game, Atletico was a 7/4 underdog compared to Real Madrid as 1/2 favorites. But once the whistle was blown, Atletico didn’t play the part of happy-to-be-there lots; they took the fight to their rivals, eventually going up in the last minutes of the first half courtesy of a well-timed Diego Godin and a clusterfuck from Real’s goalkeeper, Iker Casillas.

For pretty much the entire duration of the match, Atletico withstood every barrage Real threw it way, providing a real-life example of the “bend but don’t break” adage.

But just as Atletic’s history-making title run was being written, the ink splattered all over its pages, reducing it to nothing more than burnt ashes of a title that slipped away in the most heartbreaking ways possible.

The final score reads 4-1 in favor of Real Madrid, but that was in no way an indication of the competitiveness of the match and how close Atletico Madrid was from an alternate history that sadly, never became a reality.

You can shed a tear for these vanquished men and their fans, but know that even in defeat, no amount of respect was lost on this team.