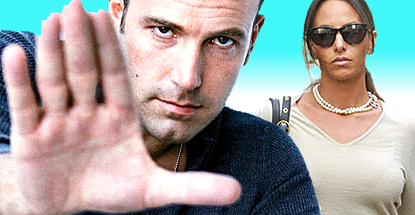 UPDATE: The Hard Rock has issued a statement saying Affleck is “not banned from our property and is welcome back any time.” The statement made no mention of whether Affleck would be welcome at the Hard Rock’s blackjack tables.

Oscar-winning Hollywood actor/writer/director Ben Affleck has reportedly been banned from the Hard Rock Casino in Las Vegas after being accused of card counting at their blackjack tables. Various celebrity-focused media reports say Affleck was booted from the casino late on April 28 after being observed “moving his money with the count.” The following day, a local security firm circulated a warning to other casinos in Vegas about Affleck’s newfound status as an advantage player, making it unlikely that the Argo star/director will be welcomed at any Strip blackjack table anytime soon.

The Hard Rock missive stated that Affleck used the “perfect basic” form of card counting, “but also takes insurance according to the count. Uses black $100 cheques to keep track of the count while playing.” Card counting isn’t illegal but casinos keep a sharp eye out for such activity, the mere suspicion of which is enough to get one frog-marched off the premises (even if you’re a holy roller).

Affleck’s math skills were apparently first spotted a week earlier during his play at Wynn Resorts’ Vegas casinos. Radar Online reported that Games Protection Manager Rob Olivetti sent an internal email detailing how the actor had been warned that that he was being “way too obvious moving his money with the count. He was spreading $100 -10K on the double decks and $0-20K ([email protected]) on the shoe games.” Olivetti noted that management had decided to let Affleck continue playing, but that ship appears to have now sailed.

Affleck’s fondness for gambling is no secret. In 2001, Affleck reportedly earned $800k playing blackjack at the Hard Rock. He’s also a noted poker player, having learned much of his craft from the late Amir Vahedi. In 2004, Affeck won the California State Poker Championship main event, earning $356k in the process. Affleck has even managed to merge his off- and onscreen activities, starring in 2013’s abysmal online poker movie Runner, Runner.

POKER PRINCESS MOLLY BLOOM GETS PROBATION
In an ironic bit of timing, news of Affleck’s banning broke on the same day that ‘poker princess’ Molly Bloom was sentenced to probation for her role in organizing illegal high-stakes poker games. Bloom was one of 34 individuals arrested last April during the Department of Justice’s crackdown on the so-called Taiwanchik-Trincher Organization, which provided illegal poker and sports betting options for Wall Street fatcats, Russian oligarchs and Hollywood celebrities. Affleck was alleged to have been among the Hollywood A-listers who patronized Bloom’s bi-coastal poker games, along with Leonardo DiCaprio, Tobey Maguire and Affleck’s buddy Matt Damon.

In December, Bloom pled guilty to operating an illegal gambling business and agreed to forfeit $25k. On Friday, Bloom appeared in Manhattan district court to learn her fate. Her attorney Jim Walden told Judge Jesse M. Furman that Bloom was a bit player in the scheme while the players at the poker games in Los Angeles “were the owners and operators” of the business.” One unnamed player was described as a “pampered celebrity with a lust for greed” who lured in “sucker players” on which the sharks could feast.

Bloom told Furman she’d “made mistakes” as well as $1m in rake and tips from her illegal activities, but was now deep in debt and working at a $19/hour job. Bloom has written a tell-all book she hopes will put her back in the black. (Molly’s Game will be published next month by Harper Collins.) Bloom was looking at a possible six-month jail sentence, but Furman let Bloom off easy, giving her a year of probation, 200 hours of community service and fined her a further $125k.